The banker to the individual | Value Research https://www.valueresearchonline.com/stories/29547/the-banker-to-the-individual/ HDFC Bank's stock always trades at a premium to the sector, which suggests high quality and clear visibility of profitability

The banker to the individual

HDFC Bank's stock always trades at a premium to the sector, which suggests high quality and clear visibility of profitability Going by market capitalisation, HDFC Bank is the largest banking company in India. It has remained among the top three banks during the last decade. In the last ten years the stock has given a return of 23.43 per cent per annum, which means your investment of ₹10,000 in the stock would have yielded ₹82,629. 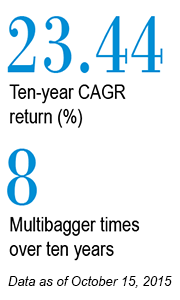 HDFC Bank has uniquely positioned itself as compared to the other two big banks (SBI and ICICI Bank) by creating its loan book mostly on individual borrowers. While other banks have struggled because of NPAs due to corporate exposure and slowdown in the economy, HDFC Bank didn't face any asset-quality issues due to the retail base, which wasn't affected much. With its vast experience in the home-loan NBFC business, the bank has developed very conservative and strict norms when it comes to the risk profiling of its customers before lending.

When every bank was lending aggressively during the infrastructure boom before the subprime crisis, HDFC Bank was still following a very careful and consistent approach. Since its inception in 1994, the bank has focused on building on the deposit base, making it the bank with the highest CASA ratio. A high CASA ratio keeps the cost of funds low and thus has enabled it to fetch an NIM of more than four and an RoA of around 2 per cent, one of the highest in the sector. 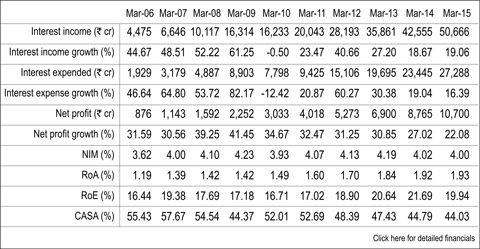 The management strategy has worked for the bank in every economic cycle and has created a strong brand with quality services. Due to quality coupled with controlled NPAs, it has been trading at a premium valuation compared to the banking sector. The ten-year average price-to-book ratio stands at 4.48. We believe that HDFC Bank will continue to thrive in the long run and continue to command premium valuations.