The right time to invest | Value Research https://www.valueresearchonline.com/stories/29155/the-right-time-to-invest/ In the ongoing volatile market, should you buy now or wait for some time? Our perspective would be to hold equity

The right time to invest

In the ongoing volatile market, should you buy now or wait for some time? Our perspective would be to hold equity

What should an active investor do when faced with a sharp market correction? There are two schools of contradictory advice. One school says, "Buy on declines." The other advocates, "Wait for the momentum to turn positive before committing more."

It is easy to find examples where one or the other advice proved correct. There have been many short, sharp bear markets where prices rapidly recovered. In such cases, the buy-on-declines school of investors gets windfall returns. There have also been many long bear markets where cautious investors did better because they held off until the correction was ultimately over.

The current downtrend has been triggered by global factors, somewhat like the subprime crisis of 2008 when a real estate bubble burst in America. This time, it's the slowdown of the Chinese economy and the bursting of an associated Chinese stock market bubble.

But there was a recession in the US sparked by the subprime crisis and that hurt India's corporates which had exposures to the US economy. Given recession in the world's largest economy, global trade collapsed for a while and FIIs also pulled out of emerging markets in 2008-09.

In contrast, the Chinese slowdown is a symptom of slow global growth and there is likely to be a direct impact. China is a very big player in global trade and global trade has been badly affected. China's exports have also lost ground and exports from other large export-oriented economies, like South Korea, have also shrunk. India's exports have dropped for the past ten months. Whatever China does to stimulate its own economy, such as currency devaluation to push exports, will also affect India.

The Indian stock market saw a very deep, very short correction. The Nifty fell from a high of 6,357 in January 2008 to a low of 2,252 in October 2008, which was a correction of 64.5 per cent in just nine months. Share-price recovery took a long time to come. The Nifty did not register a new high until December 2013, when it finally rose past 6,400. However, investors who bought in the falling market eventually made high returns.

The global economy may take a while to recover and that could mean a slow stock market recovery this time around as well. We may see a similar pattern in 2015, of a sharp correction followed by a gradual recovery. Or, we may see prices drifting down and sideways over a long while.

FDI and FII inflows are liable to slow down or reverse for some time at least and that means GDP growth projections will need to be pared down, even though there should not be a collapse of growth. India's domestic economy is large enough and dynamic enough to sustain growth at reasonable levels. On the plus side of the ledger, low commodity prices are good and low commodity prices are guaranteed until global recovery starts.

The stock market has gained consistently since December 2011, when it rose off a low of 4,531. It hit an all-time peak of 9,119 in March 2015. That's a bull run of about 40 months. A long bull market is often followed by either a deep bear market (steep falls in a relatively short period) or a long bear market, where prices drift down over a long period.

The market hit a low of 7,545 in September 2015. That was a correction of about 17 per cent from its all-time highs of March 2015. This correction has lasted just five months so far. On the grounds of time alone, it's possible that the correction will last quite a while more.

But nothing suggests that investors should pull out of all 'risky' equity allocations. There may be a bear market for an indeterminate period. But investing through that seems likely to be a good long-term strategy. If the 2008 pattern is repeated, it will certainly be a roller-coaster. But the investor who can increase commitments in such falling markets often gains.

What are the alternative channels for savings anyway? Among other common asset classes, real interest rates are positive, commodity trends (including precious metals) are negative and the Indian real estate industry is going through a crisis.

The case can be made for higher allocations to debt as a class. But higher allocations to debt should come by reducing exposure to physical assets like real estate and commodities (including precious metals). Also, existing exposures to real estate and commodities will fall in value and therefore these assets will automatically reduce as a percentage of total savings.

Passive investors don't have to take the same difficult decisions as active investors. But even for passive investors, who maintain systematic equity exposure anyhow, it is useful to know if exposure to equity as an asset class should be increased or reduced.

There are several ways to link valuations to allocation decisions. One is by comparing earnings growth rates to the P/E ratio. An old rule of thumb, the so-called 'PEG' ratio, says that the P/E should not exceed the growth (G) rate of the earnings per share (EPS) given in percentage terms. The PEG divides the P/E (a pure number) by EPS growth (percentage). The 'fair value' is assumed as 1. Below 1, the asset is an undervalued investment and over 1, it is overvalued.

Equity valuations were high through most of 2014 and 2015. Corporate earnings have stagnated for the last several quarters. The year-on-year EPS growth is negative for the Sensex and Nifty.

The Nifty was trading at a P/E of 24-plus when it hit the 9,000 mark. It is now valued at a P/E of just below 22. The valuations seem to be high for a market where EPS has fallen for the past two quarters. In PEG terms, the index is certainly overvalued. 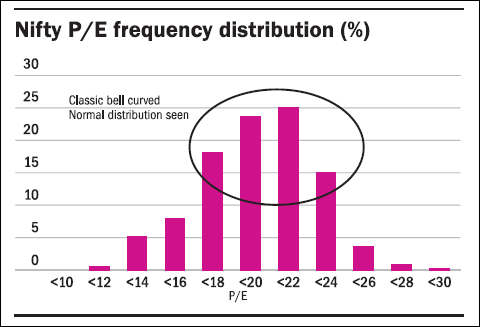 The Nifty's 11-year record conforms closely to the classic normal distribution. The predictability of this allows investors to identify situations where they can increase exposures and where they should pull back. The three-year return for investments made when the P/E is between 16 and 19.5 (within one standard deviation below the mean) is about 12 per cent CAGR while the return at lower P/Es is much higher.

In contrast, investments made when the P/E is above mean plus one standard deviation (above the P/E of 22) is close to zero and the CAGR falls as the P/E rises. See the scatter chart and table below. 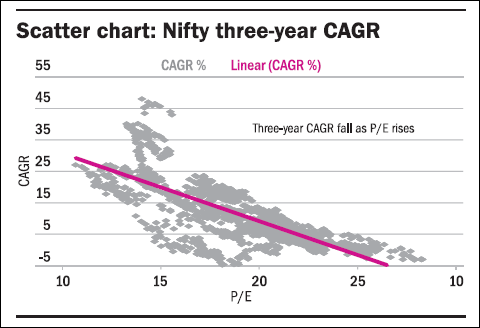 Our perspective would be to hold equity exposures without change at current levels. An active, aggressive investor could consider increasing commitments if the valuations fall below the P/E of 19. Even a passive investor with a systematic approach should consider increasing commitments if valuations fall below the P/E of 16.

This column appeared in the October 2015 Issue of Wealth Insight.