Consolidation in Retail Begins | Value Research https://www.valueresearchonline.com/stories/28149/consolidation-in-retail-begins/ The recent big-ticket mergers in the retail space point towards the impending consolidation

Recently, the retail industry saw two mega mergers. On the one hand, Bharti Retail and Future Retail decided to merge their businesses. On the other, the Aditya Birla Group decided to merge its retail arms, Pantaloons Fashion and Retail, Madura Lifestyle and Madura Fashion.

With two retail mergers involving two major players taking place within a week, the consolidation phase in brick-and-mortar retail seems to have started. The euphoria that surrounded the space when big names entered the business is already waning. The growing popularity of online retailers also poses a serious challenge to the sector. Also, a very few brick-and-mortar retailers are profitable. High real-estate cost, lack of cash, mounting debts, etc., add to their worries. No wonder, everyone is hoping that consolidation is the answer to the woes.

As per the current proposal, Aditya Birla Nuvo's branded luxury and non-luxury apparel divisions - Madura Lifestyle and Madura Fashion - will be demerged into Pantaloons and Pantaloons will be renamed as ABFRL. After the consolidation, ABFRL will cater to almost every segment - from fast fashion to luxury.

Now, the big question: What does this mean to investors? One, the merged entity would become profitable. Pantaloons is loss making, but Madura is a profitable company. So, on a net basis, ABFRL will become a profitable entity. Two, the new entity would be in a better position to take on the challenging emerging scenario in the retail space. Several foreign brands like Zara, Gap, Forever 21 and the Swedish retailer H&M have entered the Indian market in the last few years. All of them have ambitions plans for the country. Finally, there is insane competition from e-retailers like Flipkart, Snapdeal and Amazon.

ABFRL will very soon become a billion dollar company with respect to its revenues, and it would be India's first billion dollar pure-play fashion company. Organised retail has $40 billion market (2014 estimates) and is expected to grow at 18 per cent CAGR to $93 billion in 2019. With apparel sale contributing about 28 per cent of the total organised retail and owing to its strong brands, ABFRL is poised to exploit the growth opportunity. Also, it will be interesting to watch how it keeps e-retailers at bay. 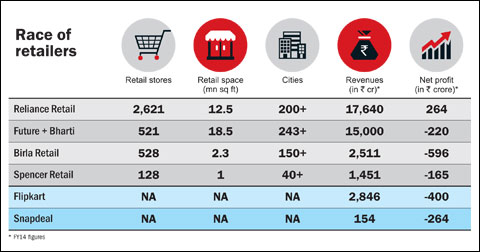 Future Group and Bharti Retail
Future Retail's merger with Bharti Retail will make it the second largest brick-and-mortar retail company in the multi-brand retail space, just behind Reliance Retail. With combined revenues of around ₹15,000 crore, the merged entity will be divided into two separate listed entities: Future Enterprises and Future Retail. Future Enterprises will be created by merging both Future's and Bharti's retail infrastructures, investments and assets. Future Retail will operate as a retail operations company. The merger is likely to take six to eight months and is subject to regulatory approvals.

Future Group promoters will hold 46-47 per cent stake in both the companies, while Bharti Retail will have around 15 per cent stake in both of them. The combined retail entity will have over 570 retail stores in 243 cities, with operational retail space of over 18.5 million square feet. It will operate 203 Big Bazaar and Easyday hypermarkets, 197 Food Bazaar and Easyday supermarkets and 171 other stores, comprising Home Town, eZone, FBB and Foodhall. Addressing a press conference, Biyani said they plan to open 4,000 smaller format stores by 2021.

The combined retail entity has a loss of about ₹220 crore, with ₹3,000+ crore in debt. With delay in FDI in multi-brand retail, retail companies are starved of cash. On the other hand, online retailers, heavily funded from venture and private equity players with deep pockets and long-term payback horizons, are rich in cash to carry out acquisitions. The extraordinary prices of real estate in big metros and now even tier I cities will make expanding difficult for traditional retailers.

Earlier Future Retail also acquired Nilgiri and KB Retail. With Bharti Retail, it will make the only pan- India retail chain. However, Reliance Retail has higher revenues and profits and little debt to take care of. Only time will tell how Future Retail exploits its pan-India network.