From Small-cap to Large-cap | Value Research https://www.valueresearchonline.com/stories/27771/from-small-cap-to-large-cap/ Companies that have moved up or down the large-, mid- and small-cap rungs of the market-cap ladder over the last ten years

From Small-cap to Large-cap

Companies that have moved up or down the large-, mid- and small-cap rungs of the market-cap ladder over the last ten years

At Value Research, our methodology of categorising a company as large, mid or small cap on the basis of market capitalisation is not fixed. It is based on relative market cap, which changes with the market movement. This means that when the overall market rises, the cutoff also rises. This also means that a company moving at the same pace as the market's will remain at the same rank in terms of being a large, mid or small cap. Therefore, for a company to move up the ladder to a higher category (for example, from small cap to mid cap), the stock has to extraordinarily outperform, and, similarly, underperformance too should be significant enough to warrant a demotion.

Following is the journey of the mentioned companies in terms of capitalisation ranks over the last ten years. 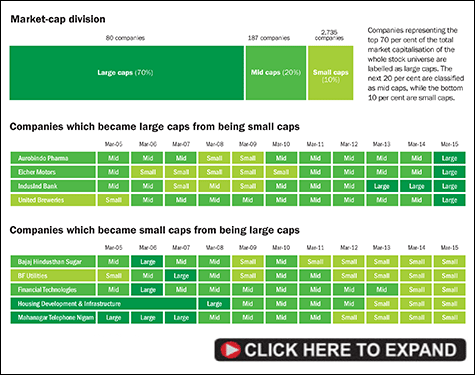