Voltas Stays in Vogue | Value Research https://www.valueresearchonline.com/stories/27599/voltas-stays-in-vogue/ At the ongoing P/E of 23, though the stock may look expensive, Voltas has a number of triggers lined up for future outperformance

At the ongoing P/E of 23, though the stock may look expensive, Voltas has a number of triggers lined up for future outperformance

Since our initial recommendation of Voltas in December 2013, the stock is up 128 per cent. Despite the gain, Voltas appears to be a good bet even at current levels. We show you why.

Voltas has two main divisions. Electro-Mechanical Projects and Services (EMPS) is the biggest, bringing in 50 per cent of revenues, in which Voltas takes up large contracts both within and outside the country. The second is the Unitary Cooling Products (UCP) division that sells Voltas' room ACs. UCP brings in 39 per cent of revenues. Growth drivers
UCP rules: Room ACs make up around 75 per cent of UCP sales. The rest come from other products like industrial ACs, commercial refrigerators like the one you see in an ice-cream parlour or your favourite cake shop. Then there are deep freezers, water coolers and even water dispensers.

Years of marketing and the quality associated with the Tata brand have helped Voltas capture a volume market share of 20 per cent (FY14). In addition, a network of 6,500 plus dealers brings the company's products to customers. UCP revenues have grown at 16 per cent annually in the last five years. This is also positive for the company.

Long-term trend intact: The penetration of ACs is limited to only four per cent of the country's 330 million households (ICICI Securities estimates). Rising disposable incomes and shift in customer preferences away from coolers to ACs is likely to improve penetration in the years ahead.

Higher AC sales ahead: The domestic room AC sector had a tough last two years with volume growth of 1-3 per cent. This was because of the combined effects of slowdown in the economy, higher inflation and tightening of purses. Voltas reported a higher-than-industry volume growth of 6.5 per cent in FY14. According to CRISIL Research, the room AC market is likely to grow at 5 per cent per annum through FY17 on the back of a 9 per cent annual growth in split ACs.

Market share gains: What is commendable is that even in a muted but hotly contested market, Voltas increased its market share by 800 basis points in the last three years. There are two primary reasons for this. As Samsung and LG stopped selling window ACs and moved to split ACs, Voltas stepped in. Remember, window ACs are entry-level products and are often the cheapest one a first-time customer can buy. Second, at the other end of the market, Voltas introduced newer products like the 'all-weather AC' and the inverter AC that promises to save more money but at a price to entice higher-end buyers.

High brand recall: How many of us do not remember the highly entertaining 'Murthy and his father-in-law' ads that are synonymous with Voltas' all-weather ACs? Voltas has developed stickiness in the mind of the Indian consumer, who also looks positively at the Tata logo and brand.

High ROCE of UCP supports loss-making EMPS: Voltas primarily assembles ACs at its Uttarakhand plant. That keeps capex, overheads and working-cash requirements low. As a result, UCP's ROCE has ranged at 40-43 per cent in the last four years. The cash flowing in has another advantage: UCP's contribution to total EBIT jumped from 32 per cent in FY11 to 75 per cent in FY14. That means even though the EMPS division is not doing well, UCP is covering base for it.

The biggest drag: Back in 2008, Voltas bagged a ₹1,000 crore project for the Sidra Medical & Research Centre, Qatar. Frequent design changes (at client behest) and other delays led to cost overruns and losses of ₹600 crore. Though Voltas is eligible for compensation from the client for such overruns, this has been the biggest drag on the company for the past couple of years. With 95 per cent of Sidra now complete, things have started looking up.

Correcting mistakes of the past: Voltas now looks at smaller projects between ₹300-400 crore with a minimum EBITDA margin of 5 per cent for international contracts, with lower working capital requirements and timely execution of such orders within 15 months. Fresh orders that the company is now booking are now above the threshold margin.

Slowdown in the Middle East to continue... Crude below $50 per barrel is likely to spell doom for future investments. Any recovery in construction activity could be years away in crude-dependent economies.

Voltas changes track to focus on India: Voltas, in the last couple of years, has been reducing its dependence on Gulf countries (the Middle East brings in one-fourth of EMPS revenues), deriving more revenues from within the country. The share of domestic orders to total orders is up from 45.5 per cent in FY12 to 56 per cent in FY14. With the Modi government firm on infrastructure-led growth, the opportunity size has just increased for Voltas.

Margin recovery on the cards: With Sidra now nearly completed, the weakest of Voltas' orders is on its way out. This means higher-margin orders are likely to shore margins up. Support from UCP, which has higher EBIT margins of 9-12 per cent (between FY10-14) should help boost overall profitability. According to ICICI Securities, margins should improve from 5 per cent (FY14) to 7.6-8.0 per cent between FY15 and FY17. 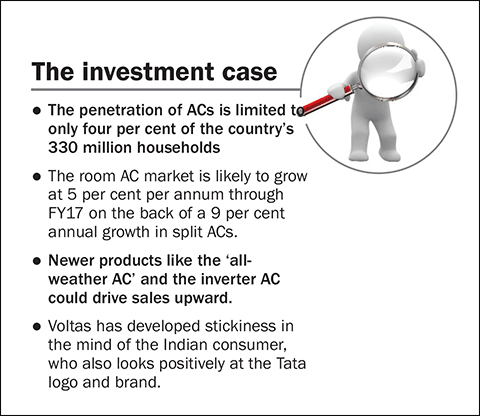 Concerns
Any slowdown in capex spending in West Asia and in economic activity will dry up the EMPS division's incremental order intake. Profitability of its UCP division is vulnerable to a rise in input costs, increase in Chinese imports, excess capacity and heightened competitive intensity.

Financials and outlook
Revenues on a YTD basis are up 1 per cent (YOY), while operating profit is up 49 per cent. Revenue is expected to grow at 12 per cent of CAGR between FY14 and FY17 (ICICI estimates), driven by higher room AC sales - an estimated revenue CAGR of 17 per cent (same period). UCP will continue to generate bulk of bottom line until the Middle East recovers or domestic orders start moving. At the current market price, the stock trades at a P/E of 23 times earnings, which is not exactly cheap, but with legacy orders on their way out, Voltas' earnings growth potential today looks brighter. The company's room AC business has indeed helped it weather tough times. Buy Voltas with a five-year horizon.