A Dove in Hawk's Feathers | Value Research https://www.valueresearchonline.com/stories/26836/a-dove-in-hawk-s-feathers/ Even though Rajan held rates this time, fund managers increased exposure to longer-maturity securities as they see cuts on the horizon

A Dove in Hawk's Feathers

Even though Rajan held rates this time, fund managers increased exposure to longer-maturity securities as they see cuts on the horizon

Having maintained a tight interest-rate regime since September, 2013, the latest monetary policy was along the expected lines as there is still uncertainty regarding the disinflationary process and macro-environment variables. The anticipated rate cut might happen only if the riders stated by the governor do not act as impediments.

However, income and gilt funds have increased their exposure to longer-maturity securities, which reflects the fund managers' conviction of the possibility of a rate cut. As per Santosh Kamath, "The three key risks for fixed income funds (interest-rate risk, credit risk and liquidity risk) appear to have reduced now in India. The interest-rate risk has reduced considerably, especially with the sharp fall in the crude oil prices. This will not only help to keep inflation in check but will also help to reduce the twin deficits and it augurs well for the economy too."

The new RBI governor laid out a clear road map to tackle the problem of inflation, which resulted in successive rate hikes leading to the poor returns being generated by longer-duration bonds. However, the governor practically promised a rate cut at some point next year, the dovish stance of the RBI governor in June caused a turnaround in gilt and income fund returns which invest in long-term securities. 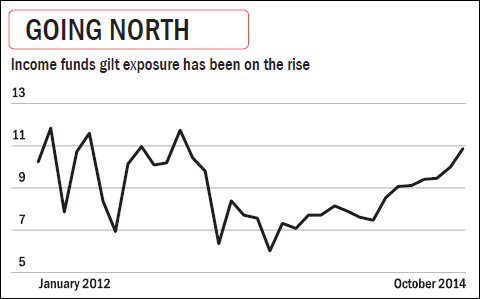