The Great 'EM Unwind' | Value Research https://www.valueresearchonline.com/stories/26654/the-great-em-unwind/ How Indian investors should tactically position themselves for the great emerging market unwinding

As the Q2 result season starts, equity markets in India are looking nervous. Volatility has increased in line with US market volatility. Headline index has been stagnant for the past few weeks after a heady, gravity defying move in the early part of the calendar year. The question most investors are wondering about is if the promised "secular" bull market is over before it started.

European economies continue to struggle with high and rising debt, slow growth or de-growth and monetary policy stuck against the zero lower bound. Italy is in recession, France seems to be slipping into one and Spain is barely holding out. Germany, dependent on exports to grow finds its exports slowing. With France likely to breach its 3 per cent fiscal deficit target, the future of the Eurozone is suspect again.

Post the crash in 2008, high leverage was identified as a key reason for the crash. A report titled "Deleveraging? What deleveraging" by Reinhart et al published in Sep 2014, points out "Contrary to widely held beliefs, the world has not yet begun to de-lever and the global debt to GDP is still growing breaking new highs." 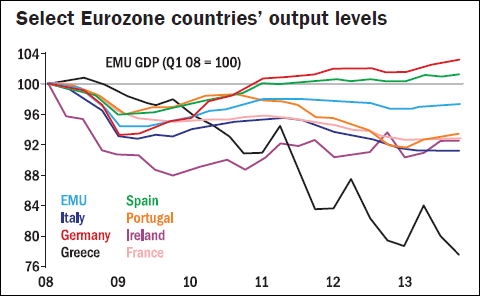 Strong dollar weaker EM markets
Expectation of weaker global growth has reduced prices of commodities, oil included. Conversely, the dollar has strengthened against its major trade partners. Fears of higher US interest rates, and improving economic growth compared to major global economies makes the US dollar a safe haven currency all over again.

A recent report by Morgan Stanley states "the EM world over the next 12-18 months will have to deal with a trinity of challenges from an unwind of financial repression in the US leading to higher real interest rates; an unwind of China's leverage, which would pull down growth there and an unwind of excess credit growth in many EM economies."

Lower oil prices and a stronger dollar do not augur well for emerging markets. Most of the world's hedge funds are short dollar long emerging markets. As the dollar carry reverses, unwinding can lead to sharp, adverse movements--the recent upsurge in the VIX is a precursor. 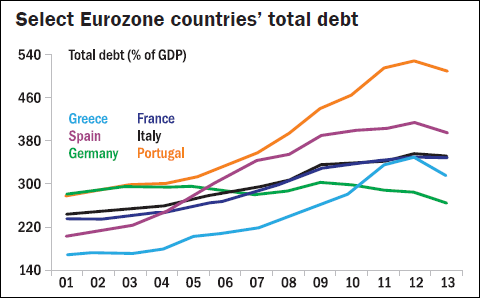 India relatively better placed
Domestic bond ownership by foreigners is less of a problem for India--given its restrictive regulations that limit foreign investors' access to government and corporate bond markets.

In May 2013, when the US hinted at the end of its 'taper', the market focussed on current account deficits. India reacted by restricting gold imports, raised real interest rates and reduced fiscal deficit. The RBI has since re-build foreign exchange reserves necessary to smoothen currency volatility.

Improvement in the current account does not insulate India totally from changes in global capital flows. As investors adjust portfolios, Indian market too will be buffeted by the headwinds--just less than other emerging economies.A stronger US currency can potentially lead to reversal of an estimated USD 12-15 bn of speculative capital inflow. 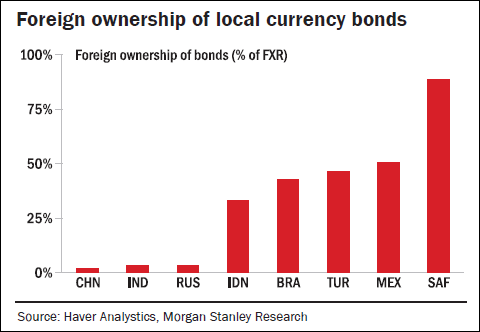 Weak oil does not always mean strong global equity markets
Falling oil prices (higher dollar) often augur poorly for world economy. US businesses for example, derive more than 50 per cent of their profits (S&P 500 companies) from outside US. A strong currency reduces these dollar denominated earnings.

Another interesting data point is the job market in the US. As pointed out by Sam Rines writing in The National Interest, Texas has created over 1 million jobs since January 2008. During the same period, overall jobs created in the US totalled 750,000. Texas is still largely an oil story. If oil falls below $70 say, it will seriously dampen the enthusiasm of companies to invest and add jobs. Without growth in oil, the US would not look very different from Europe in terms of job creation or growth. Similarly, Russia, and the middle-east have to cut-back production or suffer serious loss of income as crude prices fall.

Stay invested in dollar proxies
With some Asian economies (Indonesia, Malaysia) being exporters of commodities, softer commodity prices are not good news for them. India relatively stands out as an importer of commodities particularly oil. Net oil imports exceed $100bn per year. A $10 fall in global crude prices increases India's GDP by approximately 0.5 per cent. 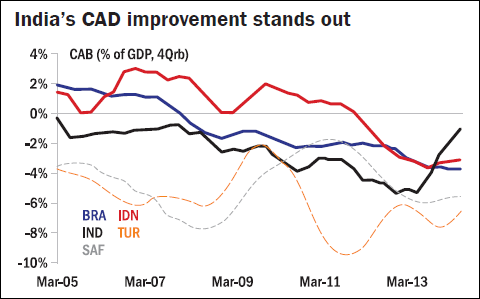 The Indian equity market too has its fair share of commodity companies. While a weaker rupee will offer some protection from imports and support domestic margins, fall in commodity prices is unlikely to be over bar occasional pull-backs. The 'trend' trade currently would be to look at proxies to a rising dollar--exporters or import substitution plays. While some of these look over-priced and 'over-owned' like pharma, others like engineering exporters, auto ancillaries, fine chemicals manufacturers still seem likely to surprise on the upside.