Strength
GDL is unique as it has three interlinked segments of the logistics business. This interlinking gives GDL a synergy which keeps its cost low, when compared to other industry players. GDL operates two container freight stations at Navi Mumbai and one each at Chennai, Visakhapatnam and Kochi with the combine capacity of 6,00,000 TEUs (twenty-foot equivalent unit). This makes GDL one of the largest CFS player in India. This is the most profitable segment for the company and has generated free cash flows in the last few years.

The company operates rail linked ICDs at Garhi-Harsaru (Gurgaon, Haryana), Sahnewal (Ludhiana, Punjab), Kalamboli (Navi Mumbai) and Asaoti (Fardibad). These inland depot owns and operates a fleet of 21 trains and more than 270 road trailers which have direct connectivity to the maritime ports at Nhava Sheva, Mudra and Pipavav. GDL has been able to convert this segment profitable since 2011.

Snowman, the GDL subsidiary operates the third segment and is one of the largest players in the cold storage business with wide supply chain operations covering more than 100 cities. It's pan India presence coupled with its own transportation connectivity gives it the necessary edge and price competitiveness.

Growth drivers
The CFS operation maritime port at JNPT, Navi Mumbai which is the biggest volume generator is going to capitalise on the growing capacity of the port. JNPT is developing its 4th terminal through Singapore PSA International wherein it will add total capacity of 4.8m TEUs in two phases by 2020. The addition will increase the freight activity and also benefit the company's CFS operations.

The major growth plan is routed on Delhi/NCR to Ahmedabad wherein the company has planned to run double stack operations between the two and then further connect it with JNPT on single track to Navi Mumbai. To boost its operations, a new terminal is also being planned in Ahmedabad at an estimated cost of ₹100 crore. This will not only boost volume growth on the Delhi-Ahmedabad route but also at the Navi Mumbai port. The margin will improve with addition of the double stack operation and planned termination of the loss making routes. The next major push in the growth is expected from the dedicated freight corridor (DFC) which is being developed by the Government of India and is expected to be operational by 2019. Being one of the largest player in this segment GDL will leverage upon this opportunity.

ICD operation at Faridabad which began in FY13 is yet to be fully operational and is delayed. Once it is fully integrated with the rail route in mid FY15, it will start contributing to the volume growth of GDL. As per the management discussions, the Faridabad ICD will initially add 25,000 TEUs capacity after commencement and 10,000 TEUs every quarter thereafter. In the cold chain storage segment, capacity expansion is the key growth driver. The management has planned to take the pallet capacity from 53,000 to 90,000 by FY16. 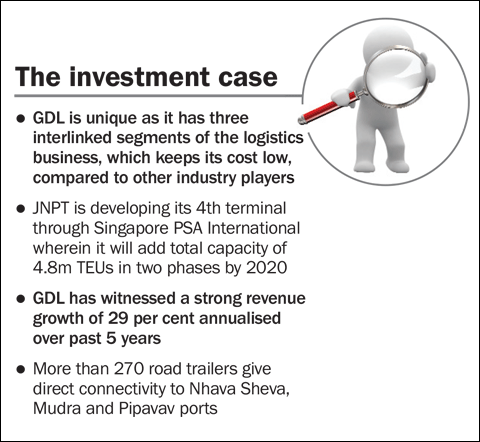 Concerns
One of GDL's inherent concerns is the overall macroeconomic scenario, which means any factor affecting the overall trade activity will also impact the volume of the company. Secondly, the price war among the logistics players has intensified over the last few years. The competition has grown in the CFS and cold chain segment which is why EBITDA margin took a hit last year due to discount offers provided by the company to woo its customers.

A lot of growth is expected from the 4th terminal at JNPT port, therefore, congestion and delay in the project can bring down the expected volume growth because the port contributes major revenue to the company. On the operational front, margins have declined over the years due to rising operational cost of freight, transportation and port charges and further it may take a hit if its continues with the same pace.

Financials
GDL has witnessed a strong revenue growth of 29 per cent annualised over past 5 years. However, the net profit grew at 13 per cent during the same period due to rising operational cost, but the margin should improve in the next couple of year due consolidation of its operations. Cash from operating activity has remained in line with company's EBITDA which is healthy sign and shows that GDL has managed its receivable very well. Return on net worth although dropped in FY13 marginally over the previous year but has improved compared preceding 4-5 years which is again a positive sign.

Valuations
GDL at current price of ₹232 is quoting a PE of 18.61 which is 20 per cent higher than its 10-year median of 15.18 due to the recent bull run in the market. Given the long term earnings growth price earnings to growth comes at one which ideal. The sector and business is highly cyclical therefore keep a check on the time when you enter and exit the stock. Remain invested over the full cycle of the sector and do not panic in the short to medium term. Therefore, invest with a long term horizon.