Surge in QIPs and IPPs | Value Research https://www.valueresearchonline.com/stories/25951/surge-in-qips-and-ipps/ Amidst the improved market sentiments, QIPs and IPPs have witnessed a sudden surge in the first quarter of FY15

Surge in QIPs and IPPs

Amidst the improved market sentiments, QIPs and IPPs have witnessed a sudden surge in the first quarter of FY15

In recent months, investor sentiments are on the up with the rise in the stock markets. While the mood is favourable, it is still early days for retail confidence to pick up for an active primary market to join the party. IPOs, FPOs and OFS are yet to make a loud noise. In the midst of all this, Qualified Institutional Placements (QIPs) and Institutional Placement Programme (IPPs) are witnessing a sudden surge in the activity. 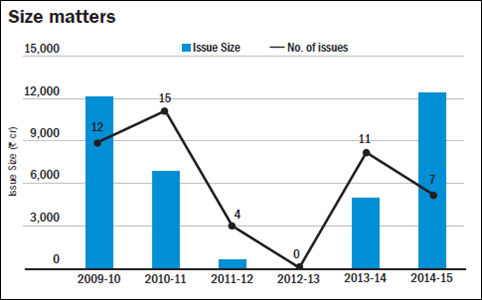 In the first quarter of FY15, seven companies issued ₹12,569 crore which is more than what was issued in the whole of FY14 and the highest in the first quarter of the preceding seven financial years (See: Raising money differently). In fact, six of the seven placements have come after the 2014 Lok Sabha election results (See: QIP and IPP issues in Q1FY15), finally indicating the return of confidence into the primary markets.

If you read deep into the data; this is the first time when the number of issues and amount raised through IPOs, FPOs and OFS, where retail investors can also participate is lower than QIPs and IPPs in FY15, where only the institutions are allowed to participate. It seems institutions still continue to dominate the Indian markets.

While this is not the end to the story and many more placements are in the pipeline. According to Prime Database (a Delhi-based tracker of primary markets) an estimated ₹30,000 crore worth of QIPs have been announced in the last few months. In recent times companies like Adani Enterprises, L&T and banks like IDBI Bank, Syndicate Bank, Union Bank have also announced their QIPs.

QIP and IPP issues in Q1FY15

Another noticeable point is that more financial institutions are preferring the QIP route with 3 out of 7 concluded in Q1FY15; surely despite the market recovery, it's still a while before primary markets see the action.