Defensive Sectors Continue to Struggle | Value Research https://www.valueresearchonline.com/stories/25665/defensive-sectors-continue-to-struggle/ Defensive sectors like FMCG, IT and Pharma don't seem to be affected by the trends that have spiked the markets

Defensive sectors like FMCG, IT and Pharma don't seem to be affected by the trends that have spiked the markets

Stock markets have witnessed a spike with rising indices over the past few months. The run up to elections continued post the new government formation with broad market indices touching new highs. While all components of the markets gained, certain sectors such as cyclicals, capital goods, banks and infrastructure gained the most.

One would have naturally expected defensive stocks to be nowhere on the radar; that is not playing out fully. While stocks in the defensive sectors like FMCG and IT are not very much aligned with the Sensex in 2014 so far; another defensive sector pharma has managed to cruise along with the Sensex. Overall, neither the pre-election nor the post-election sentiments have affected their performances. 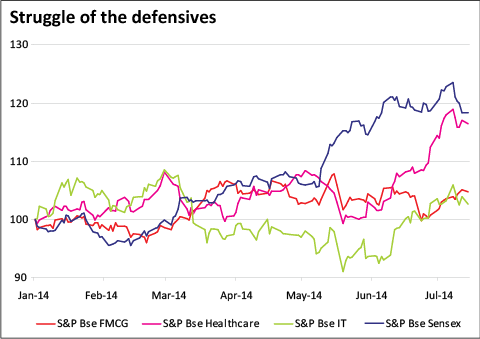