No Magic Wand | Value Research https://www.valueresearchonline.com/stories/25380/no-magic-wand/ The track record of Mr. Modi in providing a business friendly government in Gujarat is well known, but challenges galore for the new government

The track record of Mr. Modi in providing a business friendly government in Gujarat is well known, but challenges galore for the new government

A non-congress government with an absolute majority has taken charge of India. Expectations of economic revival had risen even before the new government was formed. The track record of our new prime minister in providing a business friendly government in Gujarat is well known. Market pundits are, perhaps correctly, forecasting a long and upward climb in the headline indices. Optimism is rife. In such an environment, it may help to look at the challenges that the new government has to face given the weak fiscal environment it inherits-poor growth, high inflation, and high fiscal deficit. I encourage readers to assume that they occupy the arguably large shoes of Mr. Modi and make their own policy recipes.

Reviving growth and containing fiscal deficit-contradictory aims
Ask any economist or industrialist and they will tell you that growth needs revival. Simultaneously, there is talk of returning some semblance of fiscal prudence. Unfortunately, GDP growth is directly proportional to government spending, consumption, investment and trade surplus.

The consumption story in India began to unravel sometime last year as real rural wages started to decline. While a reduction in headline inflation may lead to a short term revival in rural wage growth, it is unlikely to reach the heady growth witnessed over the Jan 10 - Jan 12 period-where real growth was in strong double digits, despite high inflation. Consumption trends seem to follow income growth as should be expected. Given the current slump, it is unlikely that income growth would revive soon-especially in rural India. 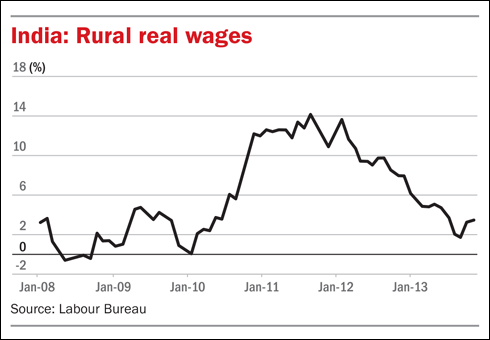 Other than investments, which we will examine separately, the other domestic factor that can drive growth is government spend. Clearly, unless there is a miraculous and dramatic revival in tax revenues, fiscal deficit has to continue to remain at elevated levels to drive growth.

Trade deficits have been sharply contained over the past 3 quarters through quantitative restrictions on gold imports and other measures. If the economy were to accelerate, import demand too will accelerate. A case in point is diesel demand. Demand has fallen in a growing economy. This will reverse if economic activity picks up. Additionally, with the rupee appreciating in recent months on account of investment inflows, exports too will become less attractive and again drive trade deficit towards larger numbers.

Containing fiscal deficit is not an easy task for the new government in the short term. In fact it may be counter-productive. 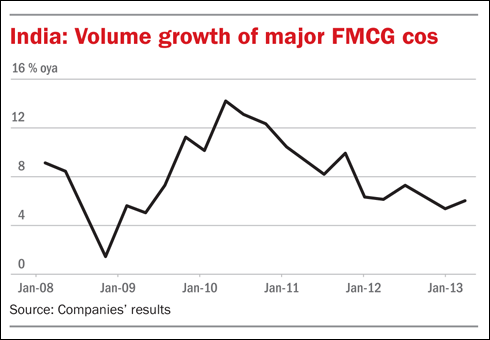 Investment revival-problem of high leverage
Another expectation that is driving markets is revival of the capex cycle. As mentioned above, this is the only component of GDP growth that could go up aside from government expenditure-but can it really? The first question is-which sector in the economy is capacity constrained? Remember, demand is recognised when there is willingness and ability to pay. Without that, “demand” is simply a need, not an economic demand. Even a sector like power seems to be operating at surplus. Recent commentary from Coal India suggests that power companies are not evacuating coal since demand is insufficient. Cement companies are operating at utilisation levels of 70 per cent, two-wheeler demand has fallen, steel and other metals are facing supply surpluses.

In addition, capital stuck in projects under implementation is at a historic high. Assuming that some of that start to release, capacity will further go up.

The real problem is the level of debt that companies have achieved in setting up new projects. Taking the BSE500(ex-financials) as the base, about 22% of the companies have negative operational cash flows. In addition, financial leverage adds an extra burden. With capital markets not affording opportunities to raise money, debt equity ratios are at a 15 year high. This has also resulted in a pile-up of restructured and non-performing assets in the banking sector. Recent estimates suggest that the public sector banks need over $40bn as capital infusion from the government. There are no plans known yet of how this will be achieved. 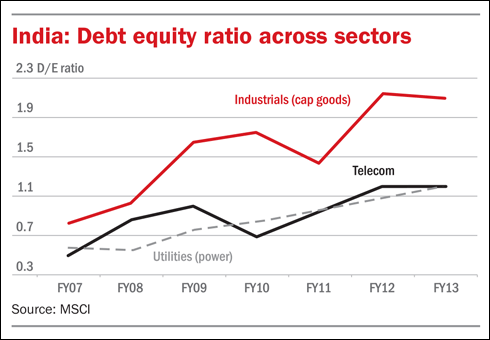 Poor ability of banks to lend, and non-viability of delayed projects will mean that many such projects will eventually be shelved. Capex cycle revival will require aggressive restructuring of loans, and fresh equity capital infusion once markets revive. This is at best a slow and halting process. An active primary market will, in-turn, cap returns from the secondary market.

The magic wand
This is not to suggest that investors should not be investing. Perhaps market confidence is at the highest in recent times, and that itself can make higher growth a possibility. Besides, a sharp reduction in corruption can be expected which in turn will lead to higher productivity of capital and ensure that less can produce more.

The point to note is that with the best intentions, options before the new government are limited in the near term. Options include privatization, allowing corporate farming and other such subjects taboo till recently. Another approach could be to restructure existing policies-for example restructuring NREGA to allow use of mechanised equipment. This can create permanent structures that can improve infrastructure. Both approaches are probably likely to be used.

Over the next three to four years, as growth normalises and companies return to generating return on equity of over 18 per cent, corporate earnings can double. This is especially true for companies that have suffered from a cyclical downturn and used the opportunity to deleverage the balance sheet and improve operating metrics. Investing in such companies can be particularly rewarding for investors. This is a time for renewed hope.