Satluj Jal Vidyut Nigam (SJVN) is a joint venture between the central Government and the Government of Himachal Pradesh (HP) and falls under the ambit of the Ministry of Power. The company operates and maintains hydro-electric power projects with the capacity of 1500 MW, which makes it one of the largest hydro power project of its time. 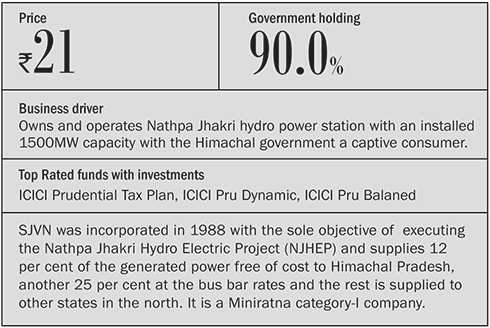 Strengths
SJVN enjoys high margin of 97 per cent over the past five years and net margin of 56 per cent in FY13, which is the highest among its peers and other segments of the power sector. SJVN is generating a very healthy free cash flow year on year amounting to ₹1,278 crore in FY13. Due to its free cash flows the company has been able to implement new projects without depending on too much debt. Its debt to equity ratio of 0.22 is among the lowest among other power companies. 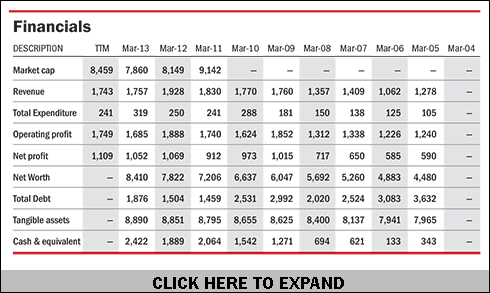 The company has increased its plants efficiencies over the years, with the Plant Availability Factor (PAL) being 105.2 per cent in FY13. The high efficiency enables the company to charge an additional price rate of 0.5 per cent as incentive over and above the RoE base of 15.5 per cent when such efficiency is maintained according to the CERC's reccomednations. The incentive earned ₹221.72 crore or 13 per cent of the total revenue in FY13.

The top-line of the company has been constant over the past few years yet the profits have risen marginally due to productive use of the plant. By the end of this year, the company will commission its second hydroelectric project in Rampur, Himachal Pradesh with a capacity of 412MW and wind power of 45MW. Once commenced it will start adding to the revenues from FY15 onwards.

SJVN is diversifying with plans to enter the thermal power generation segment. It has formed an alliance with the Bihar government for a 1320 MW Buxar Bijlee Project and also acquired coal block in Deocha-Pachami, West Bengal with 2102 MT capacity.

Concerns
Delays are common when setting up power plants, especially owing to environmental clearances and activists movements against the setting up of projects or those owing to geological surprises when executing a project. Political and rehabilitation related problems are common issues faced by most companies in the segment. However, SJVN has been lucky so far to escape these factors, barring a recent CAG criticism on poor implementation of the projects.

Another area of concern that is common to all the power sector is the price regulation by the electricity regulator CERC which has continued with its pricing model based on RoE of 15.50 per cent. However the SJVN had a RoE at around 13 per cent in FY13 so there is still further a scope improving up to 16 including 0.50 per cent for efficiency incentive. 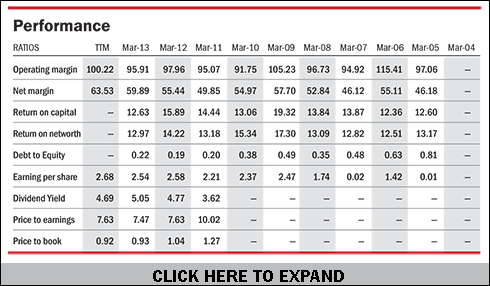 Valuation
The stock is trading at 25 per cent down to its listed price in May 2010. Price to earnings of 7.86, lowest in the sector and dividend yield of 4.66 per cent, makes it attractive. Cash balance of ₹2,000 crore which is more than 20 per cent of the market capitalisation and regular free cash flow SJVN is a value buy but unlocking of its value will depend on successfully monetising of the projects in the long term.