Sowing a success story | Value Research https://www.valueresearchonline.com/stories/22958/sowing-a-success-story/ Inflation remaining high for several years, demand to raise the per capita yield are just some of the issues which will keep KSC's seedlings healthy...

Inflation remaining high for several years, demand to raise the per capita yield are just some of the issues which will keep KSC's seedlings healthy...

After its humble beginning in 1976 when it started off with seed production of public bred varieties of corn, pearl, millet and rice, Kaveri Seed Company's (KSC) growth chart has always looked northwards. 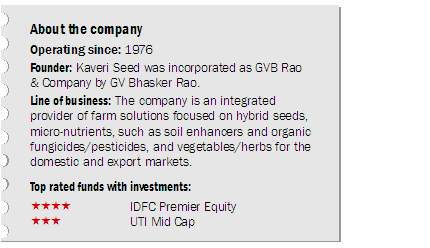 Industry overview
India is world's second-largest food producer. About 65 per cent of the Indian population still relies on agriculture and the sector contributes around 16 per cent to the GDP and 10 per cent to exports. Seeds account for 25 per cent of the cost and make up as the most important component affecting the agricultural output. The Indian seed market is the fifth-largest in the world at $2 billion and expected to grow at 12-15 per cent annually. Private sector seed companies account for 70 per cent in terms of market turnover.

Strengths
Kaveri Seed has an experience of nearly four decades in the production of quality seeds. It is among India's largest producer of certified hybrid seeds. Moreover, the company has around 600 acres of land dedicated for R&D, modern QA and biotech laboratories.
* KSC has always focused on developing quality seeds that are high yielding and consume less water and fertilisers. The company has 159 hybrid seeds registered with the Protection of Plant Varieties and Farmers' Rights Authority
* A strong product basket of cropping seeds, bio-pesticides, bio-fertilisers and micronutrients that are suited to various climatic conditions across the nation, insulates KSC from product and regional specific risks and therefore, improves revenue visibility
* It has slowly transitioned itself from being a regional player to a national player across all crops. It has more than 15,000 distributors across India
* Income from sale of seeds is considered as agricultural income and exempt from income tax. Thus, KSC has no liability to pay tax on the income generated from its seeds division that contributes more than 90 per cent to the revenues 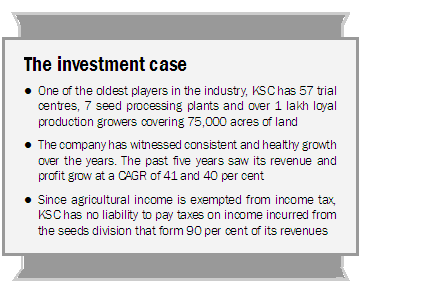 Growth drivers
Shrinking land resources, limited water supply and rising population mean that increasing the agricultural productivity is the only way to ensure that supply meets the total agricultural demand. India may be the highest producer in certain crops in terms of volumes but the per hectare yield is yet to meet its potential. The Indian hybrid seed industry is expected to grow around 15 per cent, providing ample opportunities for KSC.
* To meet the needs of the increasing population, India needs to double its agricultural output. So, there is an increase in demand for quality hybrid seeds and pesticides/fertilisers
* KSC expects exponential growth in hybrid rice market which is extremely under-penetrated. The acreage under hybrid rice in India is around 2 million hectare against the total rice acreage of 40 million. The company has many varieties of rice seeds in the market and are expected to be the next revenue drivers
* KSC doubled its market share in the cotton segment in just one year to 10 per cent. The company has 12 per cent share in Andhra Pradesh which is the biggest producer of cotton and 5 per cent share each in Maharashtra and Madhya Pradesh
* KSC has over 1,00,000 contract farmers with seed production in over 75,000 hectares. It has six seed processing plants in Andhra Pradesh and one in Karnataka
* Various states across India have increased the seed replacement rate from their current respective targets
* Putting its expertise to optimum use, KSC has established a strong brand value for its products. As a result of which, its products enjoy high brand equity and reliability in the farming community 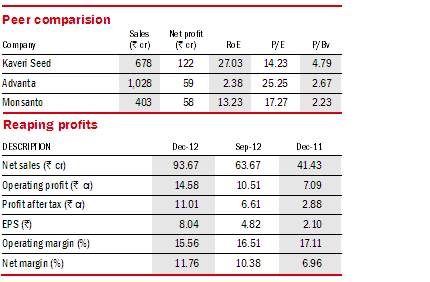 Concerns
KSC is exposed to risks associated with weather, diseases and pests. Being subject to all these factors, the company's operational results are relatively unpredictable. Although most of the products are prepared keeping these factors in mind, still, adverse weather conditions can impact quality and quantity of products
* The unorganised sector poses a stiff challenge to the organised sector. To stay ahead of the competition, companies are required to offer quality products that require huge investments in the R&D departments, thus adding on to the costs
* The Indian seeds industry is highly regulated under several Acts-- with predetermined prices, quality checks, etc. So any change in the regulations and policies can have a negative impact on revenues

Financials and valuations
KSC has been a consistent performer financially. During the past 5 years, revenues have grown at a CAGR of 41 per cent while profit at a CAGR of 40 per cent. Owing to its strong revenues from BT cotton and the growth opportunities in the hybrid seeds segment, it should be able to maintain strong revenues. KSC derives around 65 per cent of its revenues in the first quarter of the financial year. In Q3FY13, KSC reported sales of Rs 93.7 crore and net profit of Rs 11 crore-- a growth of 47 per cent and 67 per cent compared to the previous quarter.

Moreover, the company does not have any debt in its books and generates strong cash flows. It has successfully maintained an average RoE of 24 per cent for the 5-year period. At the current price of 1,223, the stock trades at a PE of 13.8 which is at a 15 per cent premium to its 5-year average of 12.

However, considering the entry barriers for new players and high brand recall, KSC should be able to maintain strong margins on the back of increased market share, new launches and new product segments.