The Intertwined Dark Stories of Q1 | Value Research https://www.valueresearchonline.com/stories/11755/the-intertwined-dark-stories-of-q1/ The first quarter of the year showed a weak set of numbers for almost all major sectors

The Intertwined Dark Stories of Q1

The economy is shrouded in an environment of high interest rates, slowing down of industrial production and consumer demand and the macro picture is also looking not that good. Goldman Sachs has pegged the GDP growth of India at 7.8 per cent for FY2009 and 7.2 for FY2010, from 8.2 percent earlier due to a weak investment outlook.

For the Q1 FY09 results, every sector had its own story to tell, albeit a sad one. A few were perturbed about the US economy running into recession, while others were lamenting on the slackening of domestic demand. All in all, it was a quarter of weak set of numbers, with a few surprises here and there.

Out of the BSE 500 companies, 182 companies had declared their quarterly results as on July 27, 2008. On an aggregate basis, the top line of companies increased by 31.38 per cent in the June FY09 quarter, as compared to 26.67 per cent in the June FY08 quarter. The profits reeled under escalating input cost, be it the cost of borrowing for service companies or commodities cost for manufacturing companies or with rising energy costs for that matter. Companies witnessed a 13 per cent increase for June FY09 quarter, compared to a 42 per cent growth in the corresponding quarter of the previous year. As results are still pouring in earnings growth is likely to be in single digit.

IT companies
The topline of 10 IT companies that had declared results as on July 27, 2008, witnessed a 28 per cent growth for June FY09 quarter, which was more or less the same as compared to last year's growth; the bottom-line growth shrank from 30 per cent to 15 per cent, primarily because of uncertain global environment, forex losses due to over-hedged position, low volume growth, rupee appreciation and concerns over their US clients' spending. All the IT firms have expressed 'caution over the global business environment'. Azim Premji, Chairman of Wipro, admitted that "there is a fair amount of pain in the US".

Besides, pain in the BFSI segment, which is the forte of many IT companies (contributes to their kitty in a big way) continues to bother them. Wipro management also acknowledged that a few clients had asked for re-negotiation of pricing, as well.

Financial Services
Banks are a loser in a rising interest rate scenario not just because of slowdown in the credit growth but also because of bonds that these banks hold, which lose value when interest rates rise. Not only did the total income took a hit, the profits growth too was reduced drastically. Top line of banks grew by 25 per cent, as compared to 38 per cent for June FY08 and bottom-line expanded by a meagre 12.50 per cent for June FY09, as against the 47.65 per cent growth for the corresponding quarter of the previous year.

Losses in treasury operations dragged down ICICI Bank's net profit by 6 per cent. During the quarter ended June 30, 2008, the bank suffered Rs 594-crore loss on its trading portfolio, due to the increase in interest rates and bond yields. For HDFC Bank the income from treasury operations was lower at Rs 43 crore, against Rs 124 crore in the previous year.

Lack of investor interest in capital markets has also taken its toll on the earnings of broking firms for the second consecutive quarter since the market turned bearish. Total income of Edelweiss Capital declined from 71 crore for the March 2008 quarter to 56.6 crore for June FY09, while net profit decreased from 10 crore for March 2008 quarter to 6.7 crore for June FY09. Profits for Indiabulls Securities was down from 55.2 crore in March 2008 to 37.4 crore in June FY09, while net sales declined from 161 crore to 121.3 crore for the same time period, mentioned above.

Interest rate sensitive sectors
Real estate and the Auto segment have been badly bruised by the rising interest rates. Realty and automobile companies have witnessed their sales as well as profits dropping by large extent for the June quarter FY2009. The First Quarter Review of Annual Statement on Monetary Policy for the Year 2008-09 on July 29, 2008 hiked the CRR by 25 basis points to 9 per cent and repo rate was hiked by 50 basis points to 9 per cent, highest since October 2000. Because of the high borrowing cost the annual growth rates of gross banks credit was 28.5 per cent at the end of March 2007, which went down to 22.8 per cent March 2008, as per the latest available data. Real estate sector is facing a double blow. Decrease in demand is likely owing to higher borrowing costs, and because of higher cost of construction, the cost of funds will increase. Similar is the case with automobiles, as most the entry two-wheelers and cars are financed by the banks loan, which have now become costly and most of the people seceding to shelve their plans of purchases. 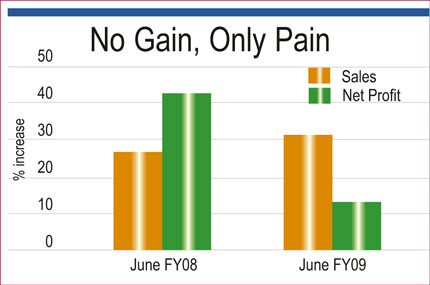