Falling by as much as 2.3 per cent in March, the contrast is quite stark when the corresponding month's figures for 2008 are looked at -- they showed a jump by 5.5 per cent.

The reverse has been squarely put at the door of a recalcitrant manufacturing sector, which contracted by 3.3 per cent in March.

A similarly sorry state of affairs was revealed in the mining sector, which barely saved itself from falling into negative terrain by rising 0.4 per cent.

The saving grace to a large extent was the power generation sector that managed a growth of 6.3 percent from the previous year's same-month figure of 3.7 per cent.

However, the poor IIP performance did not appear to be having any adverse effects on stock markets, where Sensex managed to recover the losses made earlier in the day to march to a 2 per cent gain and Nifty was up by 1.6 per cent. IT, realty and banking stocks were leading the rally. 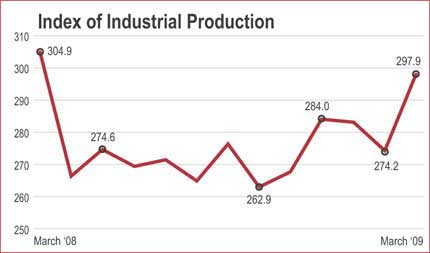