While most investors would be glad that stock markets are up, this time even inflation figures being up is a cause for cheer--at least it may well be pointing to a direction that is not deflationary, despite all the bad news on the food front.

In fact, most analysts had expected inflation figure to go negative in this week’s figures.

The data for Wholesale Price Index (WPI) for the third week of April indicates that inflation is again a notch above the previous week’s number. This week's inflation figure is 0.56 per cent till April 18. While this may be a low figure, having defied all prophets of doom expecting a zero-rate inflation regime, yet the dark aspects of the data is that food prices remain on a very high perch--for pulses, cereals, vegetables, sugar and many others.

In the second week ending April 11, inflation came in at a higher 0.26 per cent (YoY). In this week, Fuel, Power, Light and Lubricants group price remained constant while prices of primary articles and manufactured goods increased.

The week ended April 18, 2009 saw the index at 230.2 which was a gain of 0.57 per cent on a YoY basis. This rise came on the back of costlier food and other items, but it still remained close to a three-decade low. Besides food prices, manufactured and fuel items turned costlier during the week.

The WPI index had been at its lowest since March 2008 in the week ended March 7, 2009 when it was at 226.7 and in the past six weeks, the index has been either increasing or stable but hasn’t gone down. While the experts and economists are divided on their views of whether or not we will enter the deflationary situation, RBI in its Annual Policy Statement, stated that the WPI inflation will enter the negative territory in early FY10 while it is expected to return back to the positive zone of around 4 per cent by the end of March 2010.

The problem on the food front may point to a prolonged problem on the agricultural front and may well have laid the foundation for an era of high food prices, which will affect people quite adversely, but may also power a domino effect that could hit the manufacturing sector.

Leave aside solutions, no reasons are being offered for the situation. Exactly where the problem lies is uncertain. The UPA government was blaming supply side constraints when inflation figure had climbed above 7 per cent. Now, there is no longer any talk like that being made.

Considering that India has had four consecutive good monsoon seasons, which have ensured good harvests resulting in government granaries being full, there should not really have been any such dire situation building up. 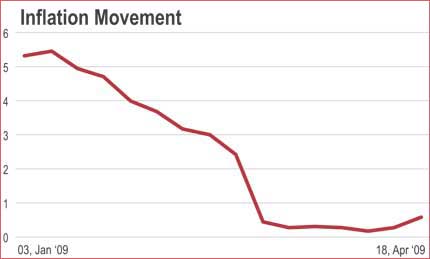