ULIP Plan vs ELSS Scheme: Which is better? | Value Research https://www.valueresearchonline.com/stories/50527/ulip-vs-elss-which-is-better/ With a cut in their cost structure and a more favourable tax treatment, ULIP policy seems to have got an edge over ELSS mutual funds. This is the second in our two-part series where we evaluate ULIP vs ELSS.

ULIP vs ELSS: Which is better? With a cut in their cost structure and a more favourable tax treatment, ULIPs seem to have got an edge over ELSS. This is the second in our two-part series where we evaluate if this is really the case.

By Aakar Rastogi and Shruti Agarwal 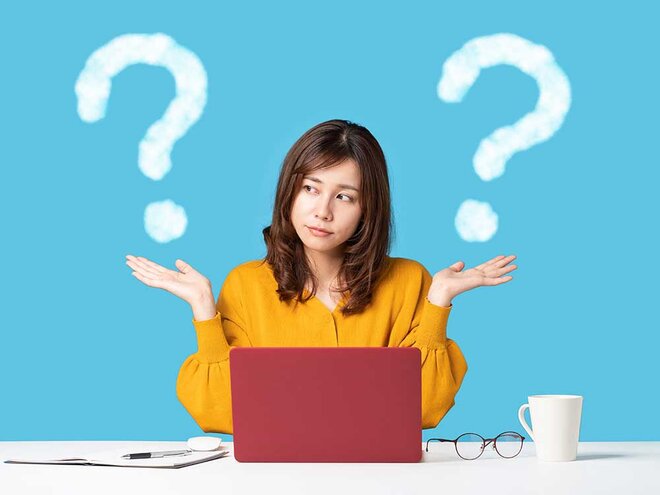 In the first part of this two-part article series, we compared ULIPs and ELSS in terms of their cost structure. Here we analyse how these two tax-saving options fare in terms of post-tax outcomes, what have been the historical trends in their performance and finally help you evaluate which is the better alternative between the two.

Convenience vs value for money
Before we dig deeper, let's have a look at the tax treatment of ULIPs as well as ELSS. Both ULIPs and ELSS qualify for tax benefits of up to Rs 1.5 lakh per financial year under Section 80C of the Income Tax Act. The Union Budget 2018 introduced the long-term capital-gain tax on equity. Under this, gains beyond Rs 1 lakh in a year from ELSS were taxable at a rate of 10 per cent, while the returns from ULIPs continued to enjoy their tax-free status. However, to bring ULIPs to a level-playing field, tax laws were tweaked in the budget last year. So, ULIP policies issued after February 1, 2021, are now taxable as capital gains if the premium amount for any of the years during the term of the policy exceeds Rs 2.5 lakh. Another important tax provision for ULIPs is that maturity proceeds are exempt from tax under Section 10(10D) only if the annual premium for the policy does not exceed 10 per cent of the sum assured. Otherwise, it is taxable at a marginal tax rate of 30 per cent plus surcharge and cess.

It's true that a ULIP combines life insurance and equity investments in a single convenient package. But convenience is not everything. We simulate how much corpus one would accumulate by investing in ULIPs as against investing the same monthly amount in an ELSS and buying a separate term insurance. Since ULIPs are not standardised, we have checked the online variants of three popular insurers available in the market (HDFC, LIC and Max Life).

As it is evident from Scenario 1, the overall costs of ULIPs and the ELSS + term plan combo are almost the same. However, the former has outperformed because of its capital-gain tax benefit that comes with an annual premium of up to Rs 2.5 lakh. But then, an insurance cover of merely Rs 25 lakh is not sufficient at all. With an increase in the policy-cover amount, ULIPs start to underperform (see scenario 2) because (1) term plans with a higher sum assured become more economical and (2) the tax treatment of ULIPs comes at par with that of ELSS. Note that these comparisons are purely based on expenses and taxes because we have assumed similar returns from ULIPs and ELSS, as mentioned earlier.

In fact, if someone is willing to invest more than Rs 2.5 lakh per annum, choosing a combination of an ELSS and a term plan brings much more flexibility. Investment in ELSS can be limited to just Rs 1.5 lakh (the maximum permissible tax deduction under Section 80C) and another Rs 50,000 can be invested in the NPS for an additional tax benefit that comes under Section 80CCD 1(B). The remaining surplus can be invested in flexi-cap funds which don't have any lock-in at all. 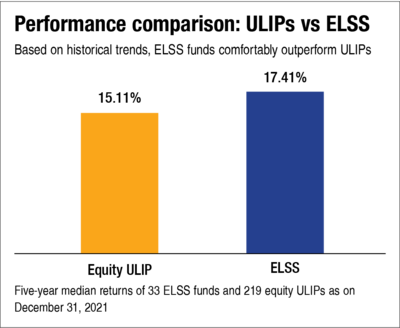 Performance metric
When it comes to performance, ELSS funds comfortably beat ULIPs based on historical trends. The median five-year returns delivered by these funds as on December 31, 2021, stood at 17.41 per cent as against 15.11 per cent in the case of ULIPs (based on the data of 219 equity-based ULIP funds available with Value Research). Further, if we categorise the combined set of these 33 ELSS funds and 219 equity ULIPs into quartile ranks, we will find that 88 per cent of the ELSS funds show up in the top two quartiles.

Conclusion
Our analysis, which is purely based on costs, suggests that ULIPs have taken the battle closer to ELSS at least with their online plans (if one goes by the distributor's route, the results are likely to vary on account of higher charges). In fact, the tax treatment lends ULIPs a slight advantage if the annual premium is up to Rs 2.5 lakh, assuming they are able to deliver returns similar to those of ELSS funds. But even in that case, investors have to compromise with the insurance cover, which would not suffice to protect their family. Further, another drawback of ULIPs is that at the time of the death of the policyholder, the nominee will not get both the insurance and investment amount but only the higher of the two amounts.

On the other hand, if one goes with ELSS and a term insurance policy, the nominee is entitled to both the investment value and the insurance amount as they both are separate. Moreover, tax-saving funds have historically proved to be more rewarding.

The table titled 'Features: ULIP vs ELSS' summarises these two tax-saving options on various parameters. So, given all these, we believe that buying ELSS and combining it with a term plan is a much better option than a ULIP, irrespective of your investment amount.