Since April 2020, after the March crash, the markets have rallied spectacularly. A number of reasons are being given for this fantastic rise in the markets: a liquidity rush to fight the pandemic, a receding pandemic, an economic rebound, good profit numbers of listed companies, etc.

So far so good. However, for the serious stock investor, perhaps the biggest challenge is where to invest in a bull run. With stocks and their valuations growing wings, your best investment ideas seem to be out of reach.

In this series of articles, we bring to you stocks that have given better returns than the Sensex over the last one year but are still available at a discount to their historical valuations.

In order to arrive at these stocks, we applied the following filters:

From the list of stocks that we so obtained, here are two large ones. 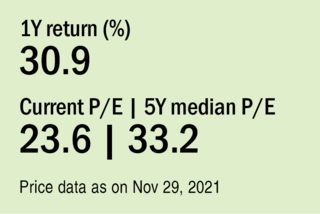 A leading manufacturer of plastic products in India with 25 manufacturing facilities, the company offers a wide range of products across various categories, including plastic-piping systems, product packaging, moulded furniture, storage and material-handling products, packaging films, to name a few. The company enjoys a significant market share across all its business verticals. In FY21, it generated a majority of its revenue from plastic-piping systems, which contributed 65 per cent to its total revenues, while industrial products, packaging products and consumer products accounted for 12 per cent, 17 per cent and 6 per cent, respectively.

Although FY21 was largely affected by the pandemic, the company still managed to increase its revenue by more than 15 per cent, owing to a rise in the price of PVC. However, its sales quantity contracted by just 1 per cent. Despite pandemic-led restrictions, the company exported goods worth $18.35 million as against $18.29 million in FY20.

Its future outlook looks bright with the re-opening of the construction sector and various government initiatives like 'Jal Jeevan Mission' and 'Nal se Jal' scheme, which act as a catalyst for the domestic plastic-piping industry over the long term. Despite a lacklustre FY21, the management is optimistic about the future and is continuing with its capex plans of Rs 850 crore in the next two years. Supreme Industries is a strong player in India's growing housing and consumer market and is well placed in the plastic-piping segment, given its strong product portfolio and a healthy balance sheet. 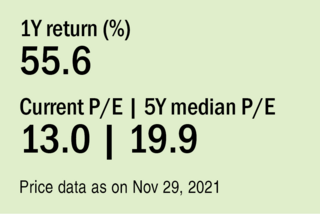 In FY21, its total revenue increased by 16 per cent and its operating profit (as measured by earnings before interest, taxes, depreciation and amortisation) more than doubled to Rs 989 crore - the highest ever since its inception. Operating cash flows of Rs 941 crore were almost equivalent to the previous four years put together. This phenomenal performance was driven by several factors, such as an increase in PVC prices, higher realisation, lower costs and a significant improvement in all operating parameters.

The government's initiatives in the affordable-housing segment, the irrigation sector and various initiatives related to rural piped-water supply are expected to act as catalysts for the PVC pipe industry. Given this, the company has decided to increase its presence in the plumbing and sanitation segments while maintaining steady growth in the agriculture segment. Finolex, being well-placed to benefit from a slew of factors such as a shift from metal to plastic pipes, the growing demand for infrastructure, an increased share of value-added products and consolidation, continues to have a bright future.

And don't forget to check out our other stories in the series: