How do you uncover those rare stocks in the equity market which can make a massive difference to your wealth in just 10 years? Motilal Oswal, through its annual wealth-creation studies for the last 23 years, has dived deep into the top 100 wealth-creating stocks in the Indian market and studied their characteristics, mainly to uncover the secrets of such multi-baggers.

The latest such study released on November 1, 2018, takes a fresh look at this phenomenon. We studied the report and followed it up with a conversation with Raamdeo Agrawal, author of the report and co-founder of Motilal Oswal, to present the following five takeaways for our readers.

Go for consistency
The study segregates the top wealth-creating stocks into three buckets. One, there's the list of the biggest wealth creators in the last five years, which is topped by some expected names. The winner HDFC Bank is followed up by Reliance Industries, TCS, Maruti Suzuki and Hindustan Unilever.

Then, there are the most consistent wealth creators - stocks that have appeared in every one of Motial Oswal's studies in the last 10 years. Titan Industries tops this list, followed by Godrej Consumer, Shree Cement, Pidilite Industries and Maruti Suzuki. 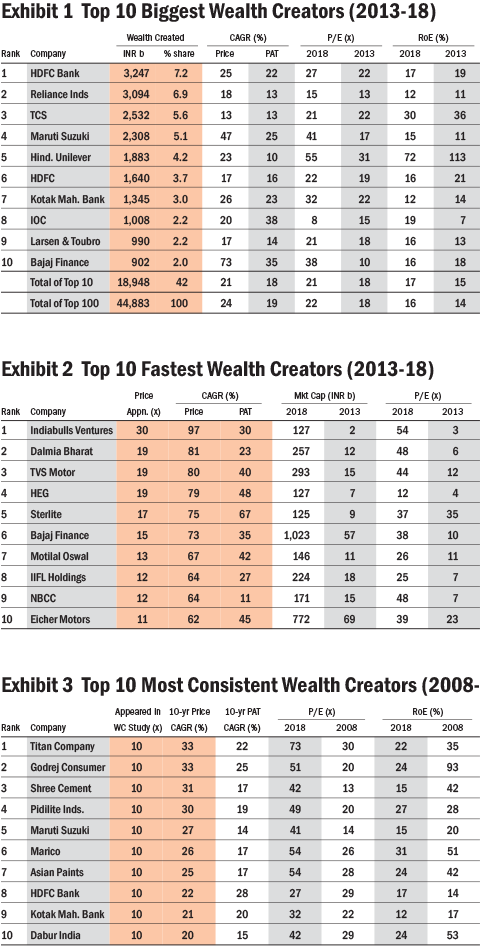 Mr Raamdeo Agrawal is quite clear that the most consistent wealth creators are your best bet but sounds a cautionary note about their valuations. "The problem is that all these stocks are at expensive valuations. If you pick them up today, this may lower your long-term returns from these stocks."

But he believes that a good strategy for investors is to create a shopping list of these stocks and look to buy them whenever they go through a bad patch. "One has to look at solid franchises which are currently going through a bad phase. In automotives, Maruti Suzuki is one such instance. It may have two or three bad quarters, but its franchise cannot be replicated even in six or seven years and passenger-car growth will eventually come back in an economy like India. It is when such good franchises suffer through bad quarters that there are opportunities to buy such stocks at a 20 P/E, instead of 40 P/E," he notes.

Don't extrapolate hyper earnings growth
Growth is great and the more of it the better. Those are lessons that are drilled into most stock investors' heads, making them search hard for high-growth stocks with high returns on equity. But the wealth-creation study has a warning for such investors. It notes that both high growth and high ROE are rare commodities in the Indian market. But more importantly, companies that deliver them often don't sustain their high growth spurt beyond five or six years.

The study finds that for an investor who started out in 2003 with 283 companies growing at 25 per cent plus, only 103 of them sustained that earnings growth in the next five years. Their number dwindled to 13 in the next five years and to zero thereafter. The key takeaway is that jumping into a stock because it posted great profit growth in the last five years is fraught with risk as that growth can easily evaporate!

Mr Agrawal explains, "That hyper earnings growth often doesn't last beyond five-six years is the biggest insight from this report. In fact, even that five-six-year period holds good only for great companies. Therefore, it is very important to assess where you are in the growth cycle if you have been holding a stock. If you are in the fourth year of holding a high-growth stock, the market would have re-rated it to a high P/E. A disappointment in earnings at that time can be doubly painful."

Just as high-growth stocks can disappoint, can low growth/ROE stocks become high ROE ones? How can investors identify them?

He outlines several situations. "At times, regulatory changes make this happen. Take oil-refining companies, which were in dire straits before fuel-price deregulation. Their ROEs have sharply improved from very low levels. Global tailwinds can do it, as we saw for Graphite India or HEG. Or take the case of Britannia Industries, which with a management change shot up from 30 per cent to a 50-60 per cent ROE. Britannia shows that the strength of a franchise can be really enhanced by a good manager. If the management makes the right decisions on pursuing good-quality businesses and shedding poor-quality ones, that can dramatically improve the company's ROE."

Don't overpay
Seasoned investors know that much of the wealth creation in stocks happens through the market taking a fancy to a business and re-rating its P/E multiple. Earnings growth plays a part but it is ultimately P/E re-rating and de-rating that make the biggest difference. When top wealth creators of a decade suddenly lose their earnings momentum, the wealth destruction is far more than the fall in their profits. Think of Unitech!

The study offers specific solutions for investors looking to avoid wealth destruction by overpaying for stocks. It finds that stocks with a high absolute P/E of 50 times or more are mostly wealth destroyers in the next three years, hugely lagging behind the market. Buying stocks at a big premium over the market P/E can also throw up similarly awful results.

The study recommends using PEG as a measure to evaluate every buy. It finds that stocks bought at a PEG of less than one delivered very significant alpha (outperformance), averaging 19 per cent in the last 20 years. But how does one arrive at the PEG? The study recommends dividing the company's trailing 12-month P/E by the expected earnings growth for the next three years. If you find a three-year forecast hard to make, use a one-year forecast.

To simplify, if the P/E you are paying is lower than the profit growth you expect for the next one, two or three years, it's a bargain. Avoid buying stocks that already trade at a PEG of 1.5 or more.

According to Mr Agrawal, to ward off wealth destruction, avoid companies that demonstrate too high growth and end up putting earnings growth over their franchise. He cites an example. "Take the HDFC group. It has consistently created wealth by not chasing 50-60 per cent growth, even in good cycles, but by delivering 15-20 per cent and staying away from high-risk growth opportunities."

To gauge valuations, the investor must also know where he is in the business cycle. As Howard Marks says in his book, most investors are behind the curve and buy a stock idea when it is at its peak. "Knowing where exactly you stand in the cycle is very important. It matters whether the company is just at the foothill of a climb in earnings, at midway point or at the peak. P/E multiples can look high at the foothills but fall as earnings growth materialises. When markets correct, there are opportunities to switch from a 70 P/E stock to a 20 P/E stock and you must take it. Remember that nothing is permanent," Mr Agrawal adds.

So, is Mr Agrawal finding low PEG opportunities in the market today? They are rare, he admits. "Most companies I like trade well over a PEG of two. But the recent correction is bringing some sanity into select sectors like private sector banks, NBFCs and, to an extent, automotives." He thinks that both private banks and good-quality NBFCs after the recent crash, throw up opportunities.

Diversify and rebalance
So, how can you protect your portfolio from mistakes? Diversification is the only way, feels Mr Agrawal.

"The mathematics of valuation has to be understood by the investor to avoid big losses. But beyond this, a diversified portfolio really helps. When you own 15-20 stocks, some will underperform the market, but some will outperform. I used to manage my own stock portfolio in the past. At times, my portfolio would go completely out of balance, with individual stocks I liked making up 20-22 per cent of the portfolio. I would be hit really hard by market corrections. But for me, this correction has been much easier to handle because with my money in Motilal Oswal Mutual Fund, the fund manager limits individual stock exposures to 10 per cent, rebalances periodically and also keeps a watch on sector concentration."

Not done yet
So what is Motilal Oswal's take on the current market? Is the correction done? No, believes the study. It cites a high Sensex P/E of 21 (long-period average of 17) as worrisome. The study noted that rather a large number of stocks in the market traded at P/Es of 40 times plus in 2018. While 27 per cent of the stocks traded at a 40 plus P/E, another 29 per cent traded at P/Es of 20-40 times. The recent correction has resulted in some moderation, but there's some way to go.

Mr Agrawal adds, "I do not believe that the market is done with this correction. The recent correction has brought the market P/E to the 20-year average. But no correction in past cycles has stopped at that. Market corrections always take valuations well below the historical average. If the number of stocks above a 40 P/E is still at 15 or 20 per cent, that indicates that there's further room for declines. That number must go below 10 per cent.

What I have seen in my 40 years in this market is that something has to give way, when valuations go so high. Either earnings have to explode for the entire corporate space, which I do not see happening today. The aggregate earnings picture is not too great. If you see the total market capitalisation to the total profits of listed companies, that P/E is at 29-30 times, which is way too high. Of course, it is difficult to say if macro factors will change this picture - oil at $65 or a good election outcome. But I feel that this is not the time for overoptimism."