Going against the tide | Value Research https://www.valueresearchonline.com/stories/46231/going-against-the-tide/ A note on how reverse-positioned brands redefine competition and why investors should look out for such brands

Going against the tide The standard paradigm along which competition evolves in any sphere of life involves gradually upping the ante. So if you and I are Indian politicians and I call you a scoundrel, you will call me an even bigger scoundrel. I will then call you and your previous generation various names. You will then retaliate and thus this linear escalation in abusive competition will continue. As Harvard Business School's marketing guru Youngme Moon explains in her short, lucid book on marketing (Different: Escaping the Competitive Herd), in business life, the standard paradigm plays out as follows:
1. A company augments its value proposition by offering customers a new benefit.
2. Customers are pleased.
3. Competitors race to match (imitate) the augmentation.
4. The augmentation becomes standard across the category.
5. Satisfaction levels are recalibrated, which is to say that customers now feel entitled to what they were grateful for yesterday.
6. Meanwhile, the expanded value proposition has expanded and the minimal requirements for competing in the category have gone up.
7. Repeat step 1.

The result of this iterative process in which everyone copies everyone else is that over time most of the players in the sector end up with very similar offerings. So, for example, once upon a time, Jet Airways was markedly more comfortable than Indigo and Indigo was markedly cheaper than Jet. Now neither is Jet Airways significantly more comfortable that Indigo nor is Indigo significantly cheaper than Jet.

In this context, reverse-positioned brands - brands which refuse to stick to the standard playbook - tend to change the paradigm and turn the industry on its head. When I was in college in the mid-1990s, I discovered the internet. I was clueless about technology but I was delighted to find Yahoo - a portal which would guide me to useful sites on sports, entertainment, travel, etc. From 1997 until 2000, I was a devoted Yahoo user. Then one day in 2001, a colleague told me about Google. Initially, I was puzzled by the emptiness of Google's search-engine page. It took me a while to understand that Google was a reverse-positioned brand. 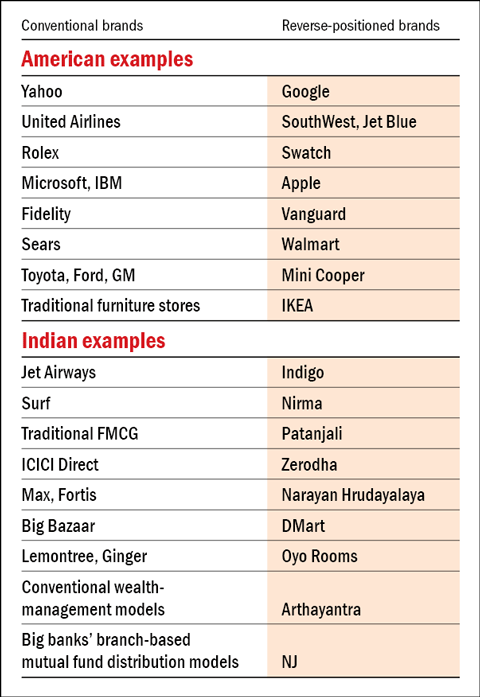 Youngme Moon defines a reverse-positioned brand as, "A very particular kind of idea brand, one that makes the deliberate decision to defy the augmentation trend in a category in which customers have come to expect augmentation. What this means is that there is a commitment to withholding benefits that the rest of the industry considers necessary to compete. Reverse brands say no where others say yes. And they do so openly...In business...there are few greater sins than failing to meet customer expectations. So nothing is likely to raise eyebrows more quickly than a decision to strip away benefits that consumers expect to receive. This is why the concept of reversal goes against every instinct a businessperson has. When the entire category is racing north, it is no trivial matter to point yourself south."

In other words, a reverse-positioned brand changes the parameters along which competition will henceforth play out in the sector. So, for example, in the American mutual fund management industry, Vanguard changed the customer's focus away from performance and towards expenses. In the process, even active investors of the stature of Warren Buffett became fans of Vanguard - the limited part of his wealth that he will leave for his family will be invested in Vanguard's index funds. Fund flows in the American mutual fund industry have now become inversely correlated to expense ratios.

In India, Zerodha has transformed customers' expectations of what online broking will cost (next to nothing) and how good brokers' website/app will be (Zerodha's cloud-based superfast site/app is streets ahead of what the traditional Indian brokers offer). Other retail brokers now have no choice but to play the game on the terms dictated by Zerodha.

A well-executed reverse positioned brand tilts the industry's competitive paradigm towards its strengths, its uniqueness (and tilts the playing field against its rivals). By focusing its offering on its strengths [for example, superfast search engine (Google); lightning-fast cloud-based broking platform (Zerodha); online distribution of mutual funds via insurance brokers, accountants, etc. (NJ); Ayurveda-centric low-cost offerings (Patanjali)] and de-emphasising its weaknesses, a reverse-positioned brand blows a standard Michael Porter five-forces type framework out of the water.

Whilst marketing gurus like Youngme Moon have articulated the market positioning of reverse-positioned brands, the man whose work really explains why such brands succeed is Simon Sinek. In his celebrated book Start With Why: How Great Leaders Inspire Everyone to Take Action, Sinek explains that firms like Apple do not focus on what they are offering (phones, watches, tablets); instead they focus on why they are offering these products. Apple's why is 'think differently'. They did it with the computer in the 1970s, with the iPod in the early noughties and with the phone in the late noughties. Apple's customers identify with the why.

Similarly, I have met Patanjali customers and Zerodha customers and DMart customers who identify with the why of these firms. I met a dollar billionaire recently who always flies with Indigo. As Sinek says, "We want to be around people and organisations who are like us and share our beliefs. When companies talk about what they do and how advanced their products are, they may have appeal, but they do not necessarily represent something to which we want to belong. But when a company clearly communicates their why, what they believe, and we believe what they believe, then we will go to extraordinary lengths to include those products in our lives."