The demand factor | Value Research https://www.valueresearchonline.com/stories/34630/the-demand-factor/ Riding on the infrastructure and housing-for-all themes, the cement sector has seen its current P/E touching 30x

Riding on the infrastructure and housing-for-all themes, the cement sector has seen its current P/E touching 30x

Cement stocks have been the market's favourite sector for a number of years now. First, the election of the Modi government raised hopes that much of the policy paralysis linked to the previous government would be resolved and India would chart a new age of infrastructural development. Secondly, the new government's housing-for-all scheme kept those hopes high that cement demand would not only sustain but grow exponentially going forward. The anticipation of huge demand raised sector valuations from their average levels of 18.2x in the last decade to the current 30x (see Figure). 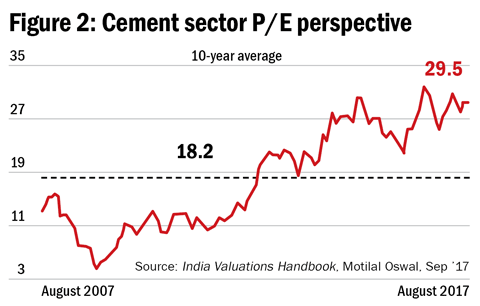 We now take a look at two expensive stocks in the cement space.

Acquisition orientation: Orient Cement
This CK Birla Group company's claim to fame is in it being the second lowest-cost cement producer in the country. The markets cheered when Orient announced in May this year its acquisition of two Jaypee Group firms - JP Associates' 75 per cent stake in Bhilai Cement and Jaiprakash Power Ventures' Nigrie cement-grinding unit for a combined Rs 1,946 crore. These acquisitions will give Orient entry into the high-growth central and eastern India and increase its capacity from 8 million tonnes to 12 million tonnes p.a. The latest quarter saw higher realisations on sharp increase in prices, especially in Maharashtra, further boosting sentiments about the company's prospects.

There are some uncertainties on the acquisition front though. What will be the equity component of the largely estimated debt-financed buyout? Will it entail dilution? What will be the profitability of the acquired companies? Current valuations leave little upside potential even as the company gears up for more debt.

Back in game: ACC
During the last five calendar years (2010-16), ACC had reported a subdued annual volume growth of 1.3 per cent on the back of weak capacity additions and poor macro level growth. But the June 2017 quarter saw the company reporting 10 per cent (YoY) volume growth - one of its highest in the last decade - that came along with a 6 per cent increase in realisations. Higher volumes and better realisations helped the company post a 38 per cent jump in operating profit.

The markets are betting on a higher government spend on infrastructure, especially in roads, highways and housing construction, to boost the cement demand in the years ahead. Further, increase in ACC's capacity addition in Kharagpur is expected to bolster volumes for the company. The merger with Ambuja is expected to result in cost synergies that could result in better margins, especially at ACC, which operates some of the oldest plants in the country. Current valuations of 50x, however, leave little scope of growth for fresh investors.