Where do real estate profits come from? | Value Research https://www.valueresearchonline.com/stories/33667/where-do-real-estate-profits-come-from/ Historic sources of real estate profits have dried up, and investors haven't figured out why they won't come back

Where do real estate profits come from?

Historic sources of real estate profits have dried up, and investors haven't figured out why they won't come back 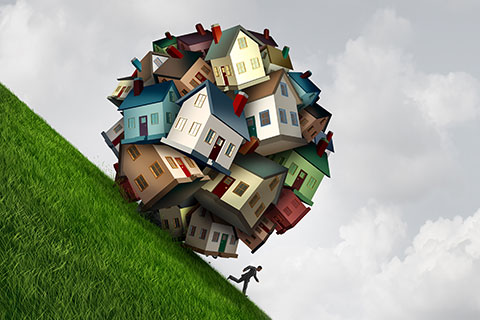 Last week, I wrote about buying a house. The main message of my column was that one should buy a house for no purpose other than to live in it. Real estate makes for a poor financial investment because the ticket size is huge, liquidity is poor. The entire investment has to be sold at one go. You may or may not be able to sell when you want to--in a slump, entire markets disappear for long periods.

A lot of people point to huge gains that were made by property owners in the past. The myth of real estate being a great investment is mostly due to mathematical illiteracy about compound growth. Someone will tell you how some land or house became 50 or 100 times its value in 40- 50 years. Sounds fabulous, but is actually nothing special. The BSE Sensex has become 300 times its value in 38 years. Even, a gain of 100 times in 50 years comes to 9.6 per cent per annum--good, but not exceptional.

But even these gains could have happened under the old model of real estate investment. That can't happen now. Let's try to understand where real estate returns came from historically. There are perhaps five sources of gains in the price of a given property, and your final profit is a product of all these. First, the original change in usage from agricultural or barren land to residential or commercial. Second, the development of physical infrastructure which makes this land usable for the new purpose. Third, the improvement in livability or commercial viability as the area gets populated more and more. Fourth, the periodic booms and busts that afflict real estate. And fifth, the general inflation of the economy that becomes part of the visible change in the property's price.

When your father's generation bought a property, they often did so at an early stage. As a result, all the gains from the second to the fifth point above accrued to them over a two or three decades. Things are very different now. You typically buy an apartment from a real estate developer. In this new model, all gains from stage one to three accrue completely to the developer and whoever came before the developer. Not just that--and this is the worst part--the developer also tries and often succeeds, in capturing much the value of the later stages in advance from the buyer.

The intense marketing hype around real estate developments is intended to convince you that one day in the imminent future, the property you are buying will be among the most desirable in your part of the country. Therefore, you must pay up for that future now. Basically, to put things in investment terms, your acquisition price is a high multiple of a value that will supposedly be attained in the far future. This future value is whatever the developer is trying to hype.

Therefore, a property in South Mumbai or South Delhi may have become 50x in 50 years. However, the flat on the outskirts of these cities that someone is pretending is worth Rs 5 crore today is not going to be saleable for Rs 250 crore after another 50 years. The reason is not that compounding is going to fail in the future, but that much of the future value is already included in that Rs 5 crore that the developer wants today. He has already sucked out that value into this current price.

The real estate investment model has changed, and as far as the individual buyer is concerned, it has changed for the worse. Much worse. Therefore, it's only logical that savers buy only one house, the one in which they are going to live in. If your lifestyle and family need many houses, then that's fine but don't consider it as a financial investment.