A composite score of financial health | Value Research https://www.valueresearchonline.com/stories/29405/a-composite-score-of-financial-health Piotroski F-Score is an easy to use single number that gives an overall financial score to a company. Learn about it

A composite score of financial health

Piotroski F-Score is an easy to use single number that gives an overall financial score to a company. Learn about it

Twenty years ago, University of Chicago Accounting Professor, Joseph Piotroski devised a methodology to score a company to determine the overall strength of their financial position.

The stocks are rated on a score of 0 to nine based on nine parameters, nine being the best. For every criteria that is met the company is given one point, if it is not met, then no points are awarded. The points are then added up to determine the best value stocks. Piotroski said financial strength could be determined using data solely from financial statements. Since the score is based on recent performance and therefore we can say it points out to the current out performer in terms of profitability and financial improvement on relative basis to its past. The Piotroski F-score was first published in 2000. You will find the score on our stock pages, under the Essential checks tab. 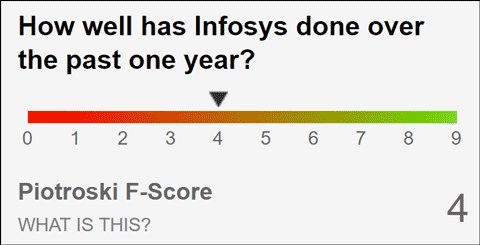 We award one point if a stock passes each test and zero if it doesn't. The maximum score is 9.

The first four criteria of the Score measure profitability.

Decoding the Piotroski Score
If a company has a score of eight or nine, it is considered strong. If the score adds up to a number between zero and two, the stock is considered weak. Piotroski's April 2000 paper, 'Value Investing: The Use of Historical Financial Statement Information to Separate Winners from Losers', demonstrated that the Piotroski score would have seen a 23 per cent annual return between 1976 and 1996 if the expected winners were bought and expected losers shorted. With any investment system, looking at past results doesn't always means it will work in the future, but having an investment plan is never a bad idea.

Our take
Since the Piotroski F-score is based on recent performance and compares the current-year numbers to those of the previous year and that too on relative basis, it points more towards recent performers. If a company has a low score, that does not necessarily mean that its financial position is weak. But yes, they have not performed in the current year. Therefore, the Piotroski F-Score comes handy to find out the companies which have performed or underperformed recently as compared to have not performed in the current year.