Originating from Gujarat, the dhandho approach is about maximising returns while minimising risks 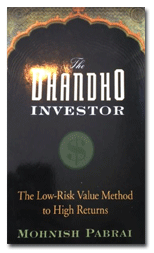 Business schools teach us that risk and reward go hand in hand. The dhandho approach to business is different: it is about maximising returns while minimising risk. The word dhandho comes from Gujarat's Patel community. The Patels arrived in the US in the seventies as mostly indigent, uneducated immigrants with poor command over the English language. From those humble beginnings they have transformed themselves into a prosperous community that dominates America's motel business. The author attributes their astounding success to the dhandho approach.

The author's own life story illustrates the efficacy of this approach. When he founded his company, Transtech Inc., all the capital that he could bank on was $30,000 in his retirement account and about $70,000 in credit card limits. To begin with, he researched the US bankruptcy laws and found that the penalty for failure wasn't high. If his start-up failed and he was unable to repay his loans, he could declare personal bankruptcy. Thereafter, he would be free to start all over again. This satisfied one of the central tenets of the dhandho approach - the downside risk should be minimal.

Pabrai founded his company in 1990 while continuing to work at the firm where he was then employed. He would work for his own company from 6.30 to 8.30 AM in the morning and again from 6 PM until midnight. Since he was only 25 then, he did not have to worry about supporting a family. When he had a couple of steady clients and his company's revenue had touched $200,000, he resigned from his job. The company that he had founded made use of India's expertise and talent pool in client-server computing to meet the talent shortage in this area in the US. In 2000 he sold his firm. On his initial investment of $30,000, he earned an annualised return of more than 65 per cent.

The point that the author makes after recounting his story is that while there was a lot of uncertainty about the outcome of his venture, the downside risk was minimal. The upside potential, on the other hand, ran into millions.

The author cites the story of Lakshmi Mittal, who features in the Forbes list of the planet's richest individuals. The steel industry has terrible economics: the producer has no control either over input or output prices, and unionised workers add to management's woes. Yet starting with a single mill in Indonesia in 1976, Mittal has created a vast fortune for himself.

Mittal's basic approach was to buy assets that were worth a dollar for a mere 10 cents. He focused on buying those assets that were perceived to be beset with multiple problems: besides the steel industry's terrible economics, the geographies that Mittal invested in were witnessing a lot of turbulence (countries like Kazakhstan and Romania after the break up of the Soviet Union); and the steel plants themselves were in terrible shape when he acquired them. Mittal then applied his considerable managerial skills to turn these plants into exceptionally efficient operations.

Having sold his company, the author founded the Pabrai Investment Funds. He believes that innovation is fraught with risk. A surer approach to wealth creation is to emulate a model that has already proved its worth. In his approach to fund management, he borrowed heavily from Warren Buffet and Charlie Manger. Like Buffet, he only invests in businesses that he understands. Even his fund's fee structure emulates that of Buffet Partnerships (which Buffett closed in 1970). Mutual funds charge an annual fund management fee irrespective of whether the fund gives a positive or negative return. Buffet charged no fee up to 6 per cent return. Only if returns exceeded 6 per cent, he took a fee that amounted to 25 per cent of the returns in excess of 6 per cent. This fee structure is a source of competitive advantage because mutual funds can't emulate it. Buffet has a skeletal staff at his Omaha office. The Pabrai Funds run with a staff of exactly one: the author himself.

Besides cost, another reason for having a single-member team, according to the author, is that investment is about taking bold bets. Within a large team there is too much dissension regarding which risky bets are worth taking. Hence, decisions taken by committees tend to be timid.

Like another great value investor John Templeton, who advocated buying stocks at the point of maximum pessimism, Pabrai advocates investing in distressed companies' stocks that belong to distressed industries. This is the area of the market where the greatest value is to be found (Mittal invested in stocks that were distressed thrice over). He writes that a stock market where extreme fear has set in is like a theatre where someone shouts: "Fire". Everyone stampedes for the exit. But based on your superior research and insight, you know that there is no real fire, so you can now buy the best seats in the theatre at a very low price.

Pabrai cites Buffet's purchase of American Express stocks after the salad oil scandal. Its main business was doing as well as ever. So when the market was dumping the stock and driving its price low, Buffet loaded up on it. In a few years the stock recovered and his bet paid off handsomely.

Being a Buffet acolyte, Pabrai also insists on investing in stocks of companies that have a wide moat: competitive advantages that rivals would find difficult to overcome.

Pabrai prefers a concentrated portfolio to a diversified one. He advocates making infrequent bets. But when the odds are overwhelmingly in favour, the investor should not shy away from making big bets, he suggests. That, in his view, is the only way to make big money. Needless to add, such heavy bets should only be placed after a lot of in-depth research. To explain why diversification doesn't work, Pabrai cites statistics from the US mutual fund universe. The average fund holds 77 stocks. The top 10 holdings represent only 25 per cent of assets. About 80-plus per cent of funds consistently lag behind the S&P 500 index and fewer than one in 200 delivers long-term annualised returns that beat the S&P 500 by more than 3 percentage points.

Pabrai's book has a chapter on selling that is truly a gem.

The book is barely 183 pages but the wisdom it contains is worth its weight in gold. This book is a must-read for all investors.

About the Author
Mohnish Pabrai was born in Mumbai, India, on June 12, 1964. He studied at Clemson College and is currently residing in the United States. He is a huge fan of Warren Buffett and says that his investment approach is inspired from Buffett's approach. Another book by Pabrai is Mosaic: Perspectives on Investing, in which he has summarised Buffett's approach to investing.

Work
Pabrai worked with Tellabs between 1986-91, first in its high speed data networking group, and then in 1989, he joined its international subsidiary, working in international marketing and sales. In 1991 he started his IT consulting and systems integration company, TransTech, Inc. He sold the company in 2000. Today he is the managing partner of the Pabrai Investment Funds, which he founded in 1999. He has won the 1999 KPMG Illinois High Tech Entrepreneur Award given by KPMG, the State of Illinois and the City of Chicago.