Myth: Stay away from falling markets and high volatility | Value Research https://www.valueresearchonline.com/stories/28054/myth-stay-away-from-falling-markets-and-high-volatility/ Falling markets are an investor's friend because he can buy good companies at a bargain. Read what Buffett says

Myth: Stay away from falling markets and high volatility

Falling markets are an investor's friend because he can buy good companies at a bargain. Read what Buffett says 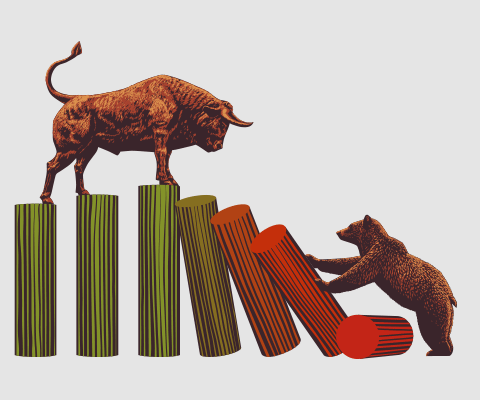 We all know the behaviour of stock prices - constantly going up and down. Falling markets are investors' worst nightmares. Yet the most successful investors in the world prefer falling markets.

Busting the myth
The stock market has frequently provided opportunities that would handsomely reward investors later on. Among them are the crash of technology stocks in 2000, and, more recently, the crash of 2008-2009. In all of these instances, panic was commonplace, prices were down and bargains aplenty. But did you buy in those times?
Most of us would like the market to go up always. Buffett, though, prefers quite the contrary. He says, 'Practically anybody in this room is probably more likely to be a net buyer of stocks over the next ten years than they are a net seller, so everyone of you should prefer lower prices. If you are a net eater of hamburger over the next ten years, you want the price of hamburgers to go down unless you are a cattle producer. If you are going to be a buyer of Coca-Cola and you don't own Coke stock, you hope the price of Coke goes down. You are looking for it to be on sale this weekend at your supermarket. You want it to be down on the weekends not up on the weekends when you tend the supermarket.'

'The New York Stock Exchange is one big supermarket of companies. And you are going to be buying stocks, what you want to have happen? You want to have those stocks go down, way down; you will make better buys then. Later on, twenty or thirty years from now when you are in a period when you are dis-saving, or when your heirs dis-save for you, then you may care about higher prices.' (Lecture at the University of Florida Business School, 1998).

The volatility nonsense
The volatility or beta of a company is one of the latest 'in-things'. A lower beta equals less risk, goes the rationale.

However, Buffett considers the conventional wisdom on volatility nonsense. 'Finance departments believe that volatility equals risk. They want to measure risk, and they don't know how to do it, basically. So they said volatility measures risk. I've often used the example of the Washington Post's stock. When I first bought it in 1973, it had gone down almost 50 per cent, from a valuation of the whole company of close to $170 million down to $80 million. Because it happened pretty fast, the beta of the stock had actually increased, and a professor would have told you that the company was riskier if you bought it for $80 million than if you bought it for $170 million. That's something I've thought about ever since they told me that 25 years ago and I still haven't figured it out,' (Berkshire Annual Meeting, 1997).

According to Warren Buffett, it is not the price that matters, but the value that a particular company creates. In a Q&A with six business schools in 1999, Buffett explained, 'When I do invest, I don't care if the stock price goes from $10 to $2 but I do care about if the value went from $10 to $2.'

Here's some advice from Buffett to those investors who keep on worrying about market fluctuations. 'We want things to go down, but I have no idea what the stock market is going to do. I never do and I never will. It is not something I think about at all. When it goes down, I look harder at what I might buy that day because I know there is more likely to be some merchandise there to use my money effectively in.' (Lecture at the University of Florida Business School, 1998).

This story was originally published in June 2015.