Income Funds Lose, FMPs Gain | Value Research https://www.valueresearchonline.com/stories/26153/income-funds-lose-fmps-gain/ Over the past year or so, fixed income investors have moved from income funds to FMPs and liquid funds

Over the past year or so, fixed income investors have moved from income funds to FMPs and liquid funds

Once bitten twice shy. This old adage seems to apply well to income funds. Income funds were quite popular until July last year, as everyone was expecting a fall in interest rates. Income funds received substantial inflows and positioned their portfolios for a rate cut, by extending duration. But the turmoil in the global market after the US Federal Reserve said it may taper its $85 billion a month bond purchase and even start hiking rates, prompted foreign investors to pull out from Indian bonds. The rupee started depreciating and reached its nadir at 68.8. But the rupee's free fall forced the RBI to suddenly hike interest rates sharply. Income funds, especially those with long duration portfolios, took a big hit to their NAV. After this, income funds suffered outflows.

However, what income funds lost was the FMPs' gain. Investors who pulled out from income funds moved towards FMPs and liquid funds to park their money. Their size has been increasing every month, from ₹168,498 crores to ₹307,759 crores, a doubling of assets. Liquid and ultra short term funds expanded from ₹263,409 crores to ₹406,557 crores too.

But with the recent budget removing the tax incentives on one to three year FMPs, one needs to see if FMPs remain so popular over time. 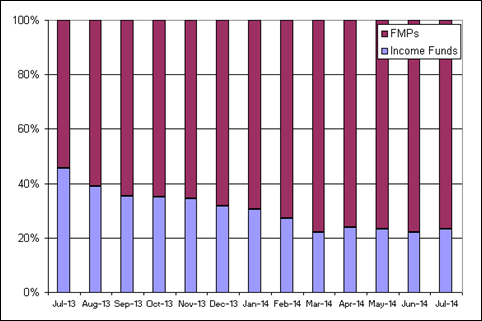