ETF and Liquidity Reality | Value Research https://www.valueresearchonline.com/stories/25448/etf-and-liquidity-reality/ Unlike open-ended funds, investors may not be able to buy or sell as many ETF units

Unlike open-ended funds, investors may not be able to buy or sell as many ETF units

A typical problem faced by investors when investing in ETFs is the non availability of units. This problem extends when one is selling their existing ETF units as well for want of few takers. When you buy an ETF on the exchange, it is just like buying a stock. You are transacting with another seller just like yourself. Your trade will be concluded only if a counter-party is willing to sell the units, at the price specified by you.

This contrasts with purchasing an open end fund which is available on tap directly from the fund house, at the day's Net Asset Value (NAV). When you buy units of an exchange traded fund (ETF) from the secondary market through your broker, you will be able to get them only at the prevailing market price quoted on the exchange; that too only if sufficient volumes of the ETF units are traded during the day.

We explored the ETF universe and zeroed on Goldman Sachs Shariah BeEs, which is one of the most illiquid ETFs. On close observation we figured that this ETF had an average trading volume of about 180 units per day over the past six months. Volumes in this fund are also quite erratic from day to day. For instance, on March 28 2014, just 5 units changed hands, the very next day this climbed to 107 units and then to over 500 units, before falling back to the double-digits.

It is for this reason that if investors attempt a trade of say 1,000 units, it is unlikely to ever go through in this fund. In fact, Goldman Sachs Shariah BeEs has seen a total daily volume of 1,000 units only on one day in the last six months (See: Low on Demand). Therefore, a limit order, where you specify the price, may not get executed. Moreover, an order as large as 1,000 units can actually impact the market price, causing it to spiral up thus raising your own cost of purchase. 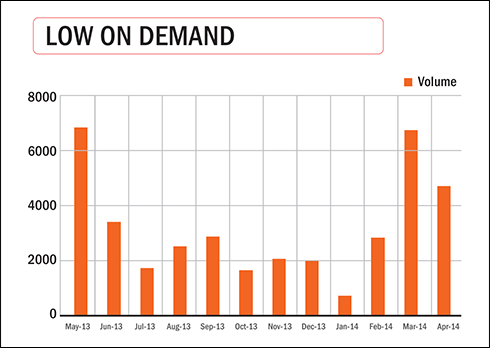 The other way to caution yourself is to put yourself in the seller's shoes; if acquiring 1,000 units is so difficult because of low trading volume, you need to brace up to the fact that at the time when you wish to sell these units, how much difficulty you will face on count of illiquidity. What more, a sell order of this size could depress the price of the units in the market, lowering your return from this investment.

Caveat emptor
Before making an investment in ETFs, you should make note of the risks involved, especially the poor liquidity that they pose. When you buy ETFs which are illiquid, you could end up paying prices that are way out of sync with the fund's Net Asset Value (NAV). This is not good for you as an investor, because the NAV represents the underlying value, per unit of the portfolio of stocks that the fund owns.

Take the Goldman Sachs Shariah BeEs. While its NAV has been on a steady uptrend, the market price has been quite volatile. In the last six months alone, there have been quite a few occasions when the units traded at a steep premium to the NAV. For instance, on April 10, 2013, the ETF's closing market price was ₹173.5 per unit, while its NAV was ₹153.7, a whopping 12.88 per cent premium (See: Dent on Returns). Similarly, on a couple of occasions in February, the units traded at a 7 per cent premium to the NAV. 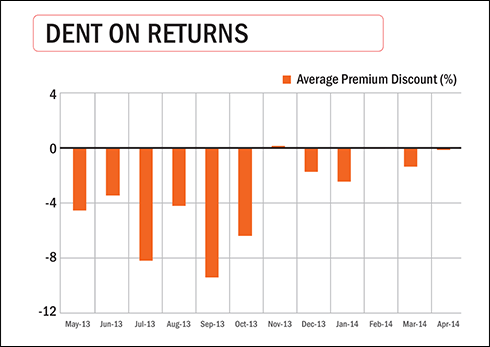 Now, had you bought units on these days, you would have paid far more than the ETF's intrinsic worth. This can dent your effective returns from investments in this fund. For instance, had you bought the fund on February 13 this year from the secondary market at its closing price of ₹152, your return till May 5 would have been marginally negative, based on its traded price. Yet, in reality, the fund's NAV has actually gained 6.4 per cent in this period (See: Slow Price Movement). Likewise, the fund has also traded at a steep discount to its NAV on quite a few occasions, such discounts can lower your returns when you try to sell the fund. Such issues dent the very low cost and low maintenance credo of ETFs, which alone cannot be the parameter to make investments in such funds.