Riches-To-Rags Tale | Value Research https://www.valueresearchonline.com/stories/11654/riches-to-rags-tale/ The Indian textile industry is turning back to retailing with exports taking a serious hit

It is not just appreciating rupee that is playing spoilsport with the Indian textile industry. Asian rivals like Vietnam, China, Pakistan and Indonesia are also providing stiff competition on price front for exports to the European Union and the US. While, India's share in US imports of clothing has risen marginally from 3.2 per cent in 1995 to 4.3 per cent in 2007. This is an insignificant increase when compared to that of Indonesia, or Vietnam which has increased by over 4 per cent. According to FICCI, India's exports to EU grew by 18.6 per cent in 2005, declined to 14.9 per cent in 2006 and to 12.6 per cent in 2007.

A look at the textiles stock price since January 2008 will tell you a story that is quite similar to other stocks as well. Just like other stocks of the universe, textiles stocks too have seen massive wealth erosion. The real picture is captured in the financial statements. While we are yet to witness an earnings contraction, textiles players have been reeling under pressure since 2007. While the top-line has increased steadily, profits have failed to catch up. Profits of Arvind Mills for FY 08 declined the most - 77 per cent. Raymond's 64 per cent, followed by Welspun 50 per cent. Arvind Mills and Vardhman have been witnessing constant decline in bottom-line since 2006.

Of late there has been some respite for the sector, thanks to the rupee depreciation and the textile industry of China which has been severely hit by its internal pressures such as rising cost of production and appreciation of Yuan. If one were to look at the latest available data, as per the Ministry of Commerce exports of textiles and clothing to the US, during January-March 2008 increased by 4.59 per cent from those of the same period of last year. This is a reasonable increase when we view it in the backdrop of a decline of US global imports of textile products during this period by 3.84 per cent.

A clear trend seems to be emerging in the domestic textile industry, wherein players are shifting their focus from the export market to the domestic market. This has resulted in large companies such as Arvind, Raymond, Alok Industries etc., trying to forward integrate into branding and retail.

Following steps are taken by Indian textile companies to remain competitive in the exports markets:
• Shifting focus to European countries
• Increasing focus on innovations
• Accepting orders only in euros
• Sourcing raw material and machines from US, etc. 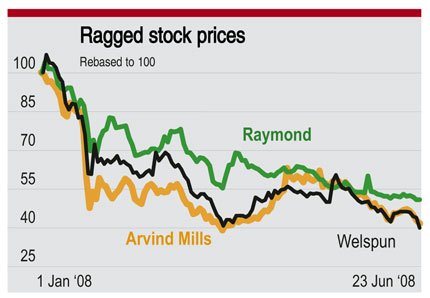