S-curves of businesses: How it helps in differentiating? | Value Research https://www.valueresearchonline.com/stories/50314/the-power-of-the-s-curve Depicting initial investment, growth and fade, the S-curve can help distinguish a great business from a mediocre one

Every successful fundamental initiative that a company undertakes broadly consists of three stages - 'initial investment', 'growth', and 'fade', as depicted in chart 'S-curve of each fundamental initiative'. The longevity and pace of growth of an initiative is defined by the slope, height and shape of the fade of its overall S-curve. The fundamentals of the overall business can be treated as an overall S-curve, which is nothing but the consolidation of all individual S-curves pertaining to each initiative the business undertakes (see chart 'Overall S-curve resulting from individual S-curves'). 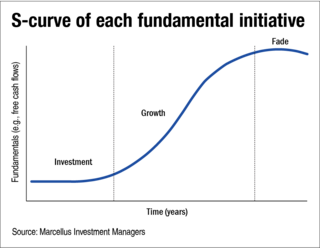 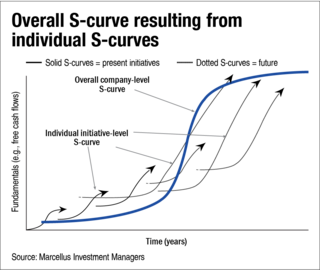 Challenges organisations face as they grow bigger
A 2012 study by Richard Foster at the Yale School of Management suggested that the average lifespan of an S&P 500 company in the US has fallen from 67 years in the 1920s to just 15 years. This is a global phenomenon. Of the 100 companies in the FTSE 100 in 1984, only 24 were still operating in 2012. However, there are also a few companies in every country that continue to survive and grow their fundamentals at a healthy rate consistently over several decades. Effectively, as shown in chart 'S-curve for CCP companies vs ordinary companies', these companies (curve 'C') deliver greater longevity of growth. ('CCP' stands for Consistent Compounders Portfolio'.) 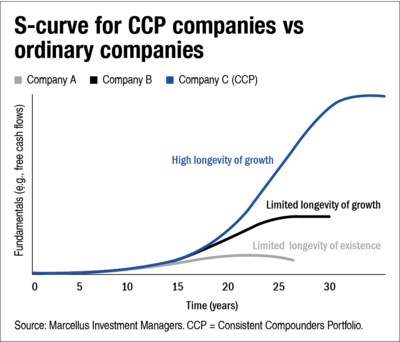 There are several factors that limit the longevity of growth for a company. For example:

There is more to the story: