Money can be earned but wealth has to be created | Value Research https://www.valueresearchonline.com/stories/47747/money-can-be-earned-but-wealth-has-to-be-created/ How Anshuman Kumar accumulated a corpus thats about 350 times his monthly expenditure

'Money can be earned but wealth has to be created' 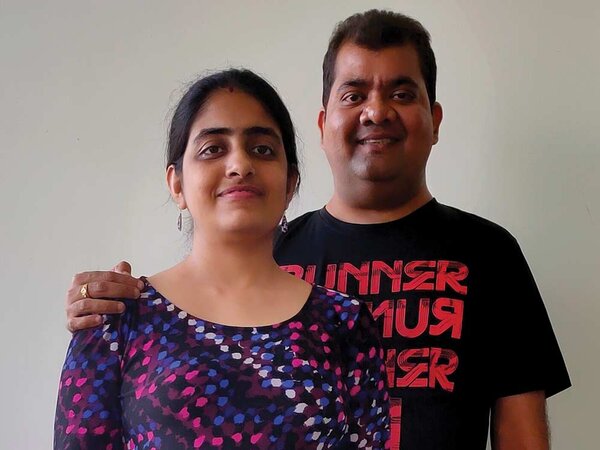 Anshuman Kumar, 37, is a firm believer in the power of investing for a brighter future. "Thinking long term is the only sine qua non for equity investments but hardly anyone does that," starts a clear-minded Anshuman. A travel enthusiast and an avid reader of financial journals and books, he likes listening to and following great financial minds, including Warren Buffet and Charlie Munger. Among Indian financial icons, he follows Dhirendra Kumar, Prashant Jain, Sankaren Naren, Nilesh Shah, Raamdeo Agrawal and Feroz Aziz.

Associated with Allahabad Bank in the clearing department in Ranchi, this alumnus of the prestigious Loyola School, Jamshedpur, is presently on leave because of some health issues. He lives with his mother, who is a teacher, wife, and his retired father.

During his formative years, even though money was scarce, his parents fulfilled his demands. "Video games, Hero Ranger bicycle, robots, air guns, etc. I wanted it all," recalls Anshuman.

However, coming from a middle-class family, or as he describes "neither poor, nor too rich, just at the sweet spot of financial well-being," he learnt some important financial lessons early.

The learning
Reminiscing his first money lesson, Anshuman says, "During my childhood, I used to get pocket money and I kept it with my grandmother. The best part was that I could withdraw small amounts from it anytime without worrying about losing my capital. But I never withdrew a large portion out of the fear that my capital might get eroded."

From 2003 to 2009, he completed his bachelor's and master's in computer applications from Birla Institute of Technology, Ranchi. During his college days, he developed a keen interest in the financial world, especially mutual funds. Anshuman remembers, "I judiciously followed the stock market and used to track the NAVs of mutual funds in the business page of the newspaper."

After passing the bank PO exam, he joined Allahabad Bank and then began his real-world understanding of finance. Recalling his second money lesson, Anshuman says, "I understand that the same amount of money has different levels of importance for different classes of people. For instance, Rs 500 may mean so much more to a daily wage earner than a wealthy businessman."

Nevertheless, his third money lesson emerged as an important milestone. "Initially, during my job, I acted greedily in the stock market. I bought a few stocks, made money, lost money but in the process, I learnt that greed never helps and the stock market is a big equaliser. It can break your ego in no time," accepts Anshuman. "Today when I look back, I feel that the money I lost in the stock market was a kind of fees for teaching me what not to do to get rich. Since then, I have not lost a penny in shares," he adds.

The first brush
In 2004, he was introduced to Mutual Fund Insight by his father's friend and his family's financial advisor. "I used to borrow the magazine from him and gradually started understanding the value of compound interest and why Einstein had called it the eighth wonder of the world. The Rule of 72 started running in my veins and I calculated everything in the investment world based on this rule," says Anshuman. "I came to know that if I give my investments time, they would give me everything that I had ever dreamed of. It was a very small cost to fulfil my dreams. In fact, it was the only cost," adds Anshuman.

He started following Dhirendra Kumar and Value Research. Calling VRO as his go-to website for all things investment, Anshuman says, "The simple and easy-to-understand investment approach of Dhirendra Kumar was not wishful thinking; it was logical and backed by data and, more importantly, patience."

His investment journey began in 2004 when his father started an SIP of Rs 2,000 in his name in HDFC Equity Fund. After his professional journey began in 2009, he gradually increased his monthly SIP contribution to Rs 12,000 by including more funds in his portfolio. Talking about his investment in HDFC Equity Fund, a patient Anshuman says, "This investment helped me embark on an amazing investment journey and taught me how to be disciplined. My investment in this fund continues, with not even one SIP instalment being missed till date."

Investments
Presently, Anshuman and his wife's monthly investment is about Rs 47,000. While his investments include HDFC Equity Fund, Kotak Emerging Bluechip Fund, Kotak Standard Multicap Fund and DSP Small Cap Fund, his wife's investment portfolio comprises Aditya Birla Sun Life Equity Fund, HDFC Mid-Cap Opportunities Fund and HDFC Small Cap Fund. Also, they invest Rs 3 lakh (Rs 1.5 lakh each) in Axis Long Term Equity Fund in three instalments of Rs 50,000 spread over a financial year. At times, they also invest lump sums but only in ICICI Balanced Advantage Fund. They chose this fund because of its stable allocation, which is able to reduce volatility. Further, they also make a one-time investment in liquid funds in the case of any windfall gains and then do an STP to equity funds.

Anshuman's goals range from building a retirement corpus of about Rs 5 crore, of which he has already accumulated Rs 50 lakh, taking international and domestic trips every few years, buying a car and preparing for any medical emergencies. For the last, he has already accumulated Rs 10 lakh and aims to continuously add more. The current annualised growth rate of his portfolio is around 14 per cent.

The criteria he uses while selecting a fund are based on his risk profile, investment horizon, fund manager's consistency and pedigree of the fund. He has also created boundaries within his asset allocation. Sixty per cent of his corpus is in large-cap, multi-cap and ELSS funds; 25 per cent in mid-cap funds; and 15 per cent in small-cap funds.

But what does a sorted Anshuman do if his funds underperform? "When my fund does not perform for a few quarters, I first compare it with both its peers and benchmark. Unless my conviction in the fund manager changes, I usually give it at least two years," says Anshuman.

He follows a 90:10 equity-debt asset allocation. The way he has devised this asset allocation makes for an insightful approach. "My personal asset allocation is a function of multiple factors. Any money not needed for five years goes into equity funds. This is because for longer-duration goals, I am prepared to allocate to a more volatile category of funds," says Anshuman. His debt allocation comprises liquid funds. It is meant for any medical emergencies that may arise due to his health issues. His job profile and family's financial background also have a bearing on his asset allocation. "My government job is like a very safe debt fund. So, it gives me the flexibility to take a considerable degree of risk. Also, my wife is associated with a wonderful IT company, which brings a lot of financial stability. All these factors let me stick to this asset allocation," says the clear-headed investor.

Anshuman likes being the owner of a company rather than a trader of its stock. Although he hasn't been much into stocks lately, he has about Rs 2 lakh invested in direct equity. He doesn't invest more than this in stocks. He feels that having a limit on stock investing keeps his belief in mutual funds intact and his action or emotion-based investing in check. His current stock holdings include Coal India, Asian Paints, Power Grid, L&T, Reliance Capital, Tata Steel and Tata Motors.

As for his insurance, Anshuman and his wife both have employer-provided medical and life insurance. He also wanted to get a personal cover to avoid dependence on his organisation. But owing to his health issues, he doesn't enjoy this freedom, "This clips my wings to fly, just a bit," says the investor sadly.

Helping others
He likes making financial plans for his closed ones. To enhance his knowledge regarding different aspects of financial planning, he has been actively giving various exams in related fields.

"Money can be earned but wealth has to be created" is Anshuman's adage in life. He feels that most people know the art of making money but do not have the knowledge to create wealth. And he likes to be the person who bridges the gap, as he himself had once been at that place. And he is not someone who just speaks. With his knowledge and experience, he has been empowering many of his family members and friends.

During 2013-14, he ran a website for a year under an initiative by Google to gauge how much people would be interested in taking his help for their investments. Through the website, he understood the kind of help people were looking for. "Presently, I am actively helping over 75 families achieve their goals through mutual funds," says a satisfied Anshuman.

A famous person once said, "To get rich, you have to be making money while you're asleep." Anshuman is quite a real-life example of the quote. Developing a habit of saving early in his life, Anshuman now has become the master of his money, which works for him day and night. He feels having sufficient money gives him clarity of thought and freedom of choice. "I was 22 when all this started and like every young person, I too dreamt of becoming rich without having to work a lot for it. Today, having more than 300-350 times my monthly expenses invested in mutual funds, that objective of life seems near. I'm sure that this investment amount will only keep on growing, thanks to the power of compounding," signs off an elated Anshuman.