With an IPO of Rs 750 crore, Ujjivan becomes the second small finance bank to get listed.

A subsidiary of Ujjivan Financial Services, Ujjivan Small Finance Bank provides finance to the underserved and unserved segments in India. Commencing its journey in February 2017, it has emerged as a leading small finance bank (SFB) within a short time span. Its product portfolio comprises loans for micro-banking customers, such as group and individual loans, agriculture loans, medium and small enterprise (MSE) loans, affordable housing loans, vehicle loans, among others. This small finance bank is also authorised to provide savings, current and a variety of deposit accounts. These services differentiate it from its promoter (Ujjivan Financial Services), which operates as an NBFC.
The bank is aiming to raise Rs 750 crore and use the amount raised to cater to capital requirements for growth.

Strengths
The unserved and underserved segments: It is one of the 10 small finance banks in India that caters to customers who do not have any access to formal banking services. Since its promoter is an erstwhile microfinance institution, the company is better able to address this segment in India.

Geographical diversification: The bank has a presence in 24 states and union territories, spanning 232 districts in India. It caters to 4.94 million customers through 552 banking outlets, including 141 unbanked rural centres (as of September 30, 2019).

The concentration of advances:A majority of advances are from customers located in Karnataka, Tamil Nadu and West Bengal. Advances from these states stood at 46 per cent of the bank's total gross advances as on March 30, 2019, Any development, such as political unrest and any kind of disruption, can adversely affect operations.

Deposits from limited customers:The bank is highly dependent on a limited number of customers for a substantial proportion of deposits. The top 20 depositors accounted for 35 per cent of the total deposits as on September 30, 2019. 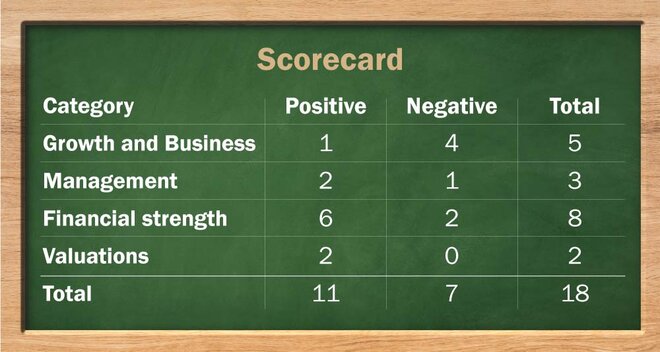 Management
1. Is the company been free of any regulatory penalties?
Yes. The Reserve Bank of India has however, found some deficiencies in its previous inspection related to the concentration of deposits, a lack of rating methodology to evaluate borrowers and a lack of fraud management system, among others. The bank has said that it would address these issues.

Financial strength and stability
1. Does the company have any fresh slippage to the total advances ratio of less than 0.25 per cent? (Fresh slippages are loans that became NPAs in the last financial year).
Yes, the gross NPA for the company declined from Rs 276 crore in FY18 to Rs 98 crore in FY19. As of September 2019, this number stood at Rs 109 crore.

2. Did the company generate a current return on equity (RoE) of more than 12 per cent and return on assets (RoA) of more than one per cent?
No, ROE for FY19 stood at 11.5 per cent; however, ROA stood at 2.2 per cent during the same period.

3. Has the company increased its loan book by 20 per cent annually over the last three years?
Not applicable, the company commenced its operations in February 2017. Therefore its performance cannot be judged because of the limited track record. However, the loan book grew by 9.5 per cent in FY19.

4. Has the company increased its Net Interest Income (NII) by 20 per cent annually over the last three years? (Net interest income is the difference between the revenue that is generated from a bank's assets and the expenses associated with paying out its liabilities).
Not applicable, The company commenced operations in February 2017. Therefore, its performance cannot be judged because of the limited track record. However, As on FY19 Net Interest Income grew by 24.7 per cent.

7. Can the company run its business without relying on any external funding in the next three years?
No. Banking is a capital-extensive business and in order to expand the business, there is always a capital requirement.


1. Will the company be able to scale up its business?
Yes, there is still plenty of scope of financial inclusion in rural areas. Since the bank has a mandate to have at least 25 per cent of banking outlets in unbanked rural centres, it will help it expand its network.

3. Does the company have a recognisable brand truly valued by its customers?
No, it is a small company operating in a highly competitive industry wherein the interest rate plays a very vital role. Any competitor offering lower interest rates will capture market share.

4. Does the company have a credible moat?
No, it operates in a highly competitive industry. It faces stiff competition from large banks, small finance banks, non-banking financial companies and microfinance companies.

5. Is the level of competition faced by the company relatively low?
No, as stated above, it operates in a highly competitive industry with stiff competition from a number of sources.

Valuation
1. Is the company's price-to-earnings ratio less than its peer median level?
Yes, it is priced at a PE of 30.5x on a post-IPO diluted basis against the median PE of 42x.

2. Is the company's price-to-book value less than its peer median level?
Yes, its price to book stands at 2.1x based on fully diluted post-IPO basis, which is less than the industry median of 4.5x.

3. Is the company's PEG ratio less than one? (The price/earnings to growth ratio (PEG ratio) is a stock's price-to-earnings (P/E) ratio divided by the growth rate of its earnings for a specified time period).
Not applicable. The company commenced its operations in February 2017. Therefore, its performance cannot be judged because of the limited track record.