The F-factor | Value Research https://www.valueresearchonline.com/stories/46771/the-f-factor/ Now, you can pick up outperforming stocks in the past one year easily by using the Piotroski F-Score. Read more Now, you can pick up outperforming stocks in the past one year easily by using the Piotroski F-Score. Read more 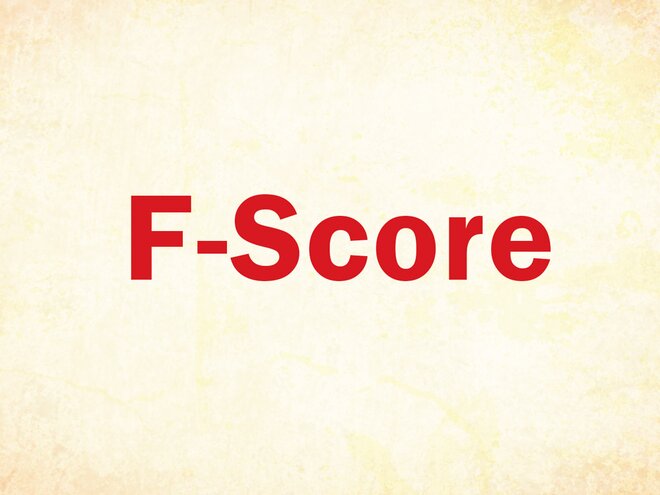 What if one can measure the financial strength of various stocks before selecting the most profitable one? Great, isn't it? The same question came to the mind of Joseph Piotroski, an accounting professor at the University of Chicago, long back. And the outcome? The methodology, Piotroski F-Score, saw the light of the day.

With the F-Score, investors can identify outperforming stocks based on nine criteria. These criteria focus on a company's recent financial performance in terms of its profitability, financial leverage along with liquidity and operating efficiency.

The following are the nine criteria of F-score. While the first four measure profitability, the next three emphasise the condition of the balance sheet and the remaining two focus on operating efficiency. To enhance the credibility of the F-score, we have used total debt-to-equity ratio instead of long-term debt. It helped us evaluate the total leverage position of the company. Besides, we've based our analysis on current margins instead of financial year-end margins.

On meeting every criterion, a company earns one point. Likewise, no point is earned if a criterion is not met. Thereafter, all the points are added up to determine the company's financial stability, profitability and efficiency.

The F-score can range right from zero to nine. A high score indicates a strong financial performance of the company in last one year. So, if a company scores eight or nine, then it is considered as a good investment. On the other hand, a company that scores between zero and two is considered a low grade. Piotroski's paper titled 'Value Investing: The use of Historical Financial statement information to separate winners from losers' sheds light on the fact that F-Score would have generated an annualised return of 23 per cent during the period between 1976 and 1996 if the expected winners were selected and the stocks with poor scores were shorted. However, history may not repeat itself. Further, the F-score lays emphasis only on the recent performance of a company. So, a low score signifies that the stock could not perform well in the past one year but it doesn't mean the financial position of the company is weak. A high score, on the other hand, lists out all companies based on only their one-year performance.

At Value Research, we give importance to an in-depth analysis of stocks and therefore, you can find the F-score of every listed company in India on their respective stock pages.