Quality stocks available at bargain | Value Research https://www.valueresearchonline.com/stories/46636/quality-stocks-available-at-bargain/ Many quality stocks have come under the shadow of the weakness in broader market. We enlist three such stocks, which could be considered by the investors Many quality stocks have come under the shadow of the weakness in broader market. We enlist three such stocks, which could be considered by the investors 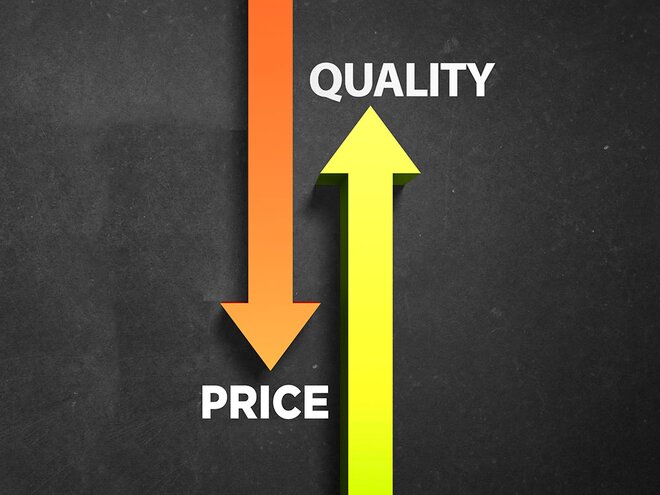 The small-cap indices fell-off the cliff, dropping by nearly 34 per cent in 2018, following two years of healthy gains. In this precipitous fall, even the stocks of quality companies, fell by 40-50 per cent in certain instances. During these dire times, investors should take clue from a quote by the 18th century British banker, Baron Rothschild, 'the time to buy is when there is blood in the streets.' But not every stock that is falling warrants a buy. How should then one differentiate the wheat from the chaff. To do this, we have applied three safety filters. These include the Altman Z-score, which predicts the likelihood of financial distress, the modified C-score, which eliminates the probability of creative accounting and the Piotroski F-score, which compares the financial performance of the current year with the previous year. In addition, some additional filters have also been applied to narrow down the list further on the basis of past performance. These are:

(we have eliminated financial companies for the purpose of our analysis, as some of our filters are not applicable to these companies).

Balaji Amines
Founded in 1988, Balaji Amines is a leading domestic manufacturer of Aliphatic Amines. Aliphatic Amines are widely used as solvent in the pharmaceutical industry which constitutes 80-90% of the mass utilized in a pharmaceutical chemical operation. In addition, amines also find their application in pesticides and insecticides, which are used in agrochemical industry. Together these two end-user industries account for about 75 per cent of total revenue for the company. Other industries where amines are also used are dyes, paper chemicals, textile and rubber chemicals. The company also has a marginal presence in the hospitality industry and derives about two per cent of its revenue from operating a five-star rated hotel property in Solapur, Maharashtra, which is also owned by it.

Going ahead, exports which constitutes about 20 per cent of its revenue, is one of the company's main focus areas. On the downside, as its critical raw material prices are closely linked to crude, any meaningful rally in crude could be detrimental to profitability.

In the last five years, its shareholders have immensely benefited from a 62.4 per cent CAGR increase in stock price. This has been underpinned by a 33 per cent CAGR in EPS growth recorded for the same period. The quality of earnings has also shown a marked improvement with the net profit margin expanding from 4.9 per cent in 2015 to 12.9 per cent in 2018. This has translated into the ROE also increasing at a healthy pace, exiting FY2018 at 27.3 per cent.

The stock has corrected by about 37 per cent in the last one year and offers investors a window to accumulate the stock.

Avanti Feeds
The company created significant wealth for its shareholders in the past, with its share price having registered a CAGR of 77.4 per cent gains per annum during the last 10 years. Incorporated in 1993, Avanti feeds has been a domestic market leader in shrimp feeds manufacturing, commanding a market share of 43 per cent (FY2018) and derives about 83 per cent of its total revenue from this segment. The company also derives about 17 per cent of its revenue from shrimp processing. It has an installed capacity of 6,00,000 metric tons (mt) per annum in shrimp feeds and 22,000 mt per annum in shrimp processing and exports. The company is also on the road of setting- up a shrimp-seed hatchery with a capacity of 400 million seeds. It benefits from its association with Thai Union Group, which was entered in 2002. Thai Union which owns 25 per cent in Avanti Feeds is the world's largest seafood manufacturer, processor and exporter.

The company has a track record of healthy growth. In the last five years, the earnings per share (EPS) has compounded at an annual growth rate of more than 36 per cent The profit margins also doubled from 6.2 per cent in FY 2014 to 13.7 per cent in FY 2018. During this period, the working capital position measured by cash conversion cycle has also registered a significant improvement. The cycle defined as the time taken to sell inventories and collect receivables due thereon, has reduced from 36 days in FY 2014 to 16 days in FY 2018. The cash flow from operations have been consistently positive increasing from Rs. 56 crore in FY 2014 to Rs. 281 crore in FY 2018. These improvements have translated into robust return on equity (ROE), which has averaged 48.7 per cent in the past five years.

In the past one year, the stock price has registered a decline of around 58 per cent. This fall can be attributed to two major reasons: Firstly, the raw material prices, started to recover to more normalised levels. In addition, demand from USA, one of their key markets, also slowed down, leading to the fall. To mitigate this dependence on USA, the company is penetrating into new markets, such as Korea, China and Japan.

The domestic sales of two wheeler industry in India has grown at a 7.9 per cent CAGR in the last five years. In the recent times, though, the domestic sales of two wheelers has been dented by a hike in insurance premiums, resulting in price hikes and an increase in oil prices. However, OEMs remain optimistic about demand recovery in the next few months.

The company has a long and consistent track record of generating positive cash from operations and earnings. Its cash conversion cycle, a gauge for working capital, has registered an improvement from 52 days in FY 2014 to 37 days in FY2018. Its return on equity has averaged 18.7 per cent in the last five years. The stock price has registered an annualised gain of 36.5 per cent per annum in the last five years. During the last one year, the stock price has declined by about 30 per cent and gives the investors an opportunity to accumulate the stock. The stock is currently available at an attractive earnings yield (operating profit/enterprise value) of 11.3 per cent.