Which stocks would Benjamin Graham pick in India today? Donning value investing caps, we applied price/book valuation with some other filters to arrive at two such stocks 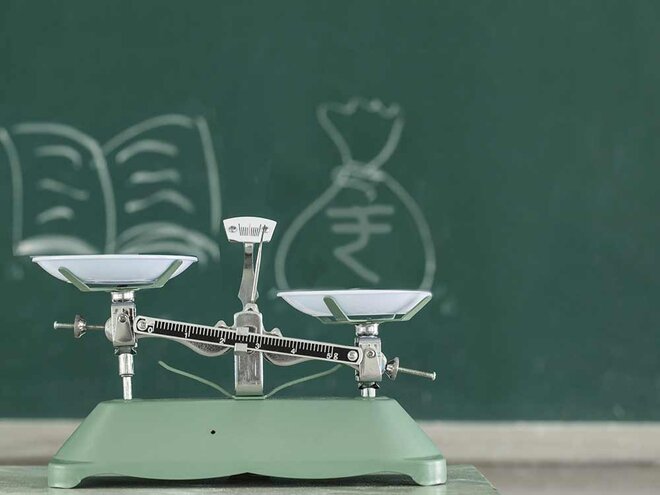 Any value investor will tell you that the best time to buy a stock is when it is trading below its intrinsic value. But how does one arrive at the intrinsic value of a company? There are different ways to arrive at a company's worth. One of them is to look at the book value of a company. A company trading at a price less than the net book value is considered to be attractively priced. Looking at price to book value is a very useful metric, as the market can be inefficient at times and ignore companies that are actually trading at less than their net worth.

Price to book ratio is calculated by dividing the market price of a share of the company by the book value of its equity. Let's now understand what exactly is meant by book value. Assets = Liabilities + Equity. Rearranging the formula we arrive at book value, which is your total assets after paying off all your liabilities. For example let's consider land, the balance sheet would only reflect the purchase cost of the land and not the market value. Hence, land purchased 10 years back would have appreciated and have a way higher market value than is seen on the books. However, with another asset such as maybe a worn down building may have value on the books but there may not be a single buyer for it at that price.

It is best to use the P/BV metric in capital intensive businesses, as their tangible assets make up most of the assets. In addition, P/BV would not be a good ratio to analyse a company with high debt, as higher liabilities may eat into the assets creating artificially high book values. It is also best to combine price to book value with RoE, as both should move in the same direction.

The most important thing is whether the assets hold up. Something may look valuable on the books, but may not be as valuable in the market. We tried to get a sense of the value the market was actually assigning to the assets on the balance sheet. We decided to look at companies which were trading below book value. As always we applied our own filters to arrive at a shortlist. We found two companies that have rising sales and earnings, but are trading at a discount to their book value of assets. And tangible assets constituted a majority of their assets.

This approach may look like a very simple method to find undervalued companies, but due to its numerous shortcomings, such as being appropriate for only capital-intensive or financial businesses, which have mostly tangible assets, it can't be the only ratio deciding whether the company is undervalued or not. Through accounting entries, like the one-time impairment loss as reported by Tata Motors in the December quarter, book values can be highly volatile and may not show the true picture. In such cases price to book ratio will have very little use. Of the shortlisted companies, we delved deep into the following two companies:

National Aluminium Company Ltd
This public sector undertaking (government holds 56.7% in the company) has integrated operations in mining, metals and power. It is well diversified across all three verticals. The company is keeping in the mind the importance of the government in the production of renewable energy with having commissioned 198 MW wind power plants and has another 50 MW wind power plants are in the pipeline. It has a presence in international markets as it was the first Indian public sector company to have registered on the London Metal Exchange way back in 1989. In addition to this exports accounted for 43% of its sales turnover of FY18.

Last year (FY18) was a notable year for the company, as revenue registered a growth of 26% and profits almost doubled. Furthermore it achieved 100% capacity utilisation for the second consecutive year in their bauxite mines and 100% normative capacity in alumina hydrate production.Other positives for the company are that it is net debt free (as its short term borrowings are significantly lower than its cash) and there is regular outflow of dividends along with sufficient cash reserves despite additions to gross block. They have consistently for the last couple of years been one of the lowest-cost producers of alumina in the world. In the first half of FY19, its results reflected a sharp rise in TTM adjusted EPS at Rs 11.26 and compounded increase in adjusted TTM earnings per share over the last five years being 32.8%. This is in addition to a compounded increase in TTM sales at 10.8% over the last 5 years. Net profit of Rs 1197 crore in the first half of FY19 was higher than Rs 364 crore in the corresponding period last year, clocking a growth of 229%. Despite significant additions to its plant and machinery and additions in capacity, it is a bargain as its P/BV is at 0.96x.

However, aluminium prices have dropped below $2000/t levels, which reflects global growth concerns and a fall in demand, in line with other base metals. As the turnover is highly dependent on aluminium prices, one has to be on a lookout for further performance till the trade tensions ease and demand picks up.

India Glycols
India Glycols is a company that manufactures bulk speciality and performance chemicals. Its uniqueness lies in its manufacturing process, which involves green technology based production of chemicals. Chemicals manufactured at its integrated facilities include glycols, ethoxylates, glycol ethers and acetates and several other performance chemicals. Its product range is across spirits, herbal and other petrochemical extracts and spirits, which are used by many industries. Keeping in mind the high dependence on the availability of raw materials, the company has ventured into sugar manufacturing to ensure continuous supply. The company has segmented its business into:

Coming to the financial performance of the company, it has shown a turnaround over the last few years with revenue at Rs 1359.69cr in Q2 FY19 vs Rs 1162.87cr in Q2 FY18 up by 17% and earnings per share at Rs 14.10 vs Rs 4.74 in the corresponding quarter of the previous year. Looking at it on a half yearly basis, profit after tax of the company was Rs 85.87 crore for H1 FY19 vs Rs 22.95 crore in H1 FY18 registering and increase of 274.16%. A major source of its revenue comes from industrial chemicals followed by ethyl alcohol and nutraceuticals. Its current RoE is at 12.2% and has been continuously growing for the last five years. With expansion plans and addition of capacity in place the book value of assets has been steadily rising along with profits and sales signifying efficient use of assets and operational efficiency.

India is the third largest chemical producer in Asia. Manufacturing has been given a major push under various initiatives under the current government such as "Make In India". India Glycols is well placed to benefit from the favourable environment for manufacturers in the country. Furthermore, the pollution control norms in China have cut down production of chemicals, which is another factor that India Glycols can cash in on. Being the only green petrochemical company of its kind, it clearly has a competitive edge as environmental concerns globally are on the rise and demand for environment-friendly surfactants and speciality chemicals is moving higher along with it.

Another point to note, is its strategy of moving from being a supplier of commodity products to a supplier of performance-driven speciality products. Getting more than you pay for in this company with a P/BV of less than 1x does make us want to dig deeper into the company.