Oil: The last hurrah | Value Research https://www.valueresearchonline.com/stories/45840/oil-the-last-hurrah/ Why the rally in crude oil may not last long 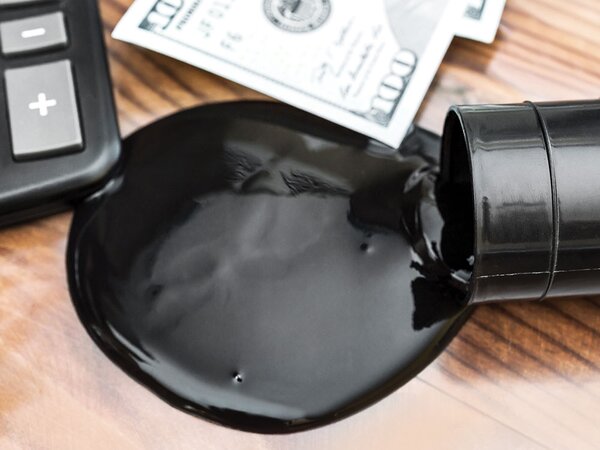 Why the rally in crude oil may not last long I still remember the oil shocks of the Iran-Iraq war, and of course, the US-Iraq War (which saw peak oil/Hubbert's peak and $147/barrel). And I remember the terror as we contemplated a future without oil and how our lives would change if we had to scrape the bottom of the barrel.

There are desperate co-ordinated attempts to create the same kind of panic this time. The spread between Brent and WTI, a kind of 'fear premium' that indicated the state of geopolitics (mostly Middle Eastern politics), is now at historic highs. This spread was supposed to represent how much Asia and Europe would be paying extra over the actual 'economic' price of oil (as represented by the 'strategically comfortable' US).

The obvious motive right now is to recoup the $1.4 trillion of bank lending that had gone into shale oil during its boom-capex years (2013 to 2017). All this has come good. Now for fresh lending to happen, you need a three-year forward curve (which, right now, is already in backwardation to the extent of 9 per cent in the first year itself). Given that the shale-oil cost curve is now estimated to be under $48 and is going to $35, the incremental supply possible is very large (which explains the stubborn refusal to invest in Big Oil capex any more).

So there are many votaries of higher oil prices and they are all very powerful people. But there are two natural forces that will weigh on oil prices, like the proverbial elephant in the room. One is that only 40-60 per cent of the oil market is in the hands of cartels (principally OPEC and Russia), while the rest is now with 'free-traders'. And there's a huge 10-12 per cent 'swing capacity' now counterbalancing the Saudi clout, which is shale.

Most important, the rising threat of solar starting to influence prices, especially forward prices, at the margin is keeping the upward momentum in check. Most of the panic, therefore, is in the spot market, which is why this is not an oil shock and may not become one.

Far more important is the demand side. Most of the growth in demand comes from China-India and both are rapidly adding solar capacities. It is possible to shift some oil demand to being serviced by off-grid solar. In India, it is possible to buy a cheap electric vehicle for `6 lakh and feed it with rooftop solar electricity that costs under `3 lakh. That caps your cost of personal transportation. If you're paying beyond that, it's because you don't want the headache of setting up solar rooftops. India is shifting some oil demand to ethanol, a win-win for the sugar industry, which is sitting on historic stocks.

At a particular price point, this will become a big thing, especially if this is seen as a long-term trend. India is right now replacing 3,00,000 barrels of oil per day consumption with just the increase in solar capacity per annum. China is doing about six times that. Remember, a 2 per cent surplus will halve oil prices; we have already seen that.

At some point, as the threat from solar becomes clear, there will be a 'race to the bottom', as marginal producers realise that their oil reserves become useless if they hold onto them. At that tipping point, every drop in oil prices will actually result in an increase in production (subject to variable cost getting covered). That would bring it under $20.

But this is over the very long term. In the short run, the market is reacting to short-term drops in inventory. It had been driven into complacence by the large inventories, which had used up tanker space. Mainly, this violent reaction to the drop in inventories is more that the market is now shaken out of its complacence, rather than any genuine demand-supply imbalance.

The actual problem is the meddling by the cartel (OPEC) in the world's largest commodity. Their production cutbacks and the geopolitics has pushed oil prices to the limits of tolerance. Any sustainable rise above these levels should slow down global economic growth, as importers rush to cut back on short-term sources of demand.
This brings me back to the point I am making, one of those conversions I just mentioned above. The frustrated oil consumer who takes the trouble to set up some rooftop solar capacity and buy that EV is not going to come back to oil, regardless of prices hitting the floor subsequently. Other energy-saving programmes in industry will be spurred by any long-term buoyancy in oil prices. Based on the same pattern illustrated above, anything which can be converted into off-grid solar will be quickly converted because the solar ecosystem is alive and thriving in many of the importing countries.

Trump is trying to kill two birds with one stone in the Iran-Venezuela sanctions game. While he will hit where it hurts (the pocket) by denying them the oil bonanza, he is creating space for US shale oil to grow into that space if there can be a long-term forward rate that is viable. If enough long-term forward contracts can be written, it will set off another shale boom, which will create huge jobs fair in his favoured Midwest, exactly in the middle of Trump-voting territory.

Over the short term, this political motive might or might not work. But the unintended consequence of this will be a spur to conversion to solar, which now has a mature ecosystem to push off-grid installations, including rooftop solar.

The Modi government is doing its bit, although it might have reached the end of its ability to milk taxes out of this milch cow. While this is a tax on the middle class/affluent, the vehicle-owning class, it also creates an incentive to shift to cheaper mixes and public transportation, which has really improved since the last oil shock (2008). I don't see that happening without protests, but any further increases will pinch. Still, it has been a great milch cow for government revenues, allowing the government to cross-subsidise its many welfare programmes.

A return to the old policy of subsidising oil consumption would send entirely the wrong message to economy watchers. It would be tough, but a concerted push by the government to push conversion to other sources of energy (ethanol, off-grid solar) would send the right message. Besides any sign of an uptick in oil prices, the joker in the pack would be a slowdown in demand, as users who cannot pass on these price hikes drop out of consumption.

While the media keeps talking about the fall in the rupee against the dollar as a reaction to oil prices, remember that is is only a trigger, maybe even a catalyst. The actual driver is the reversal of carry-trading flows that are reacting to the rise in US interest rates (which is why this rupee depreciation coincides with the appreciation in the dollar index), and the importer panic, which is a regular occurrence because of the traditionally low hedge ratio prevailing on forex exposures. This always exacerbates the volatility.

It is not yet clear that the merchandise trade deficit has deteriorated significantly, although it will show an effect with a time lapse. Any cooling down in the dollar index could lead to flows, which could reverse some of the rupee depreciation. So don't be surprised if this cools off suddenly.

This column appeared in the June 2018 issue of Wealth Insight.