The small cap maven | Value Research https://www.valueresearchonline.com/stories/35673/the-small-cap-maven Specialising in mid and small caps, R Janakiraman talks to all stakeholders before investing in a company

Specialising in mid and small caps, R Janakiraman talks to all stakeholders before investing in a company

R Janakiraman, VP and Portfolio Manager - Equities, Franklin Templeton India is a mid and small-cap specialist. He manages Franklin India Smaller Companies and Prima Funds. While researching potential investments, Janakiraman talks to all stake holders which include companies, its suppliers and customers, competitors and even retired professionals. According to Janakiraman, the dominant player in an industry often creates value, while other me-too stocks of the same industry just join the ride up.

What he sold: IndusInd Bank, technology stocks
Janakiraman's biggest stake cut was in IndusInd bank, which is trading at close to 10-year highs and is still expensive at a price to book of 4.6x. He also reduced stakes in technology companies, completely exiting Oracle Financial Services and pruning position in Mindtree and Cyient.

What he's loading up on: Idea Cellular
Janakiraman loaded up on Idea Cellular. He bought more than Rs 420 crore worth of shares of India's third-largest telecom operator. Idea is going to merge with Vodafone, the country's second largest. The Idea-Voda combine will overtake Airtel and become number one in a now four-player industry.

An interesting pick: Colgate-Palmolive
Colgate trades at 45 times earnings. The stock has not gone anywhere in the last three years and the company has lost around 4 per cent market share, mostly to upstart Patanjali. Colgate's counter attack with its new launches of Ayurveda products has helped arrest further market share loss. The valuations though are eye-watering. 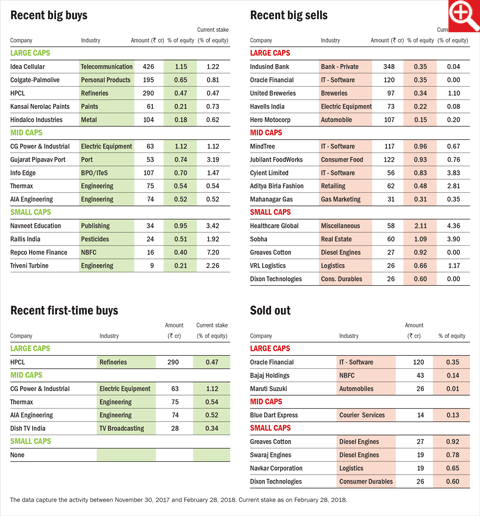