The trampoline effect | Value Research https://www.valueresearchonline.com/stories/35100/the-trampoline-effect/ Having come out of the Maggi mess, Nestle India has rebounded strongly. But it's priced more dearly than even the market leader Hindustan Unilever Having come out of the Maggi mess, Nestle India has rebounded strongly. But it's priced more dearly than even the market leader Hindustan Unilever Nestle's Maggi has faced a number of threats in its long life in the country. Almost all of those threats have vanished over time. The company is still recovering from the Maggi ban of 2015, while Patanjali tries its hand to take some market share away. In spite of these hits, Nestle finds itself an absolute favourite of the market, valued even higher than the king-sized HUL. The markets have a number of reasons to be so bullish about Nestle. Here are some of them:

Robust revenue growth: The company reported revenue growth of 9 per cent (YoY) in the September 2017 quarter. This growth came fast after the GST introduction, while other food companies are still trying to find their ground. The management has indicated growth was volume-led across all product groups.

Expansion in operating margin: The company weathered higher staff and material costs to report operating margin expansion of 220 basis points. It managed this feat by cutting down on other expenses.

Strong earnings growth: The volume-led growth coupled with higher margins saw Nestle report earnings growth of 21 per cent in the same quarter. This is fantastic, given the generally weak earnings profile across sectors.

Why you should still avoid the stock
In the last one year, Nestle has gained 27 per cent - the same as the Sensex. The current valuations of 70x are so high that Nestle commands a higher premium than industry leader HUL. One reason for this could be that Nestle's categories are far from being fully penetrated as is the case with some of HULs' key categories like soaps and toothpastes. For example, Nestle's flagship Maggi is available at only half of the country's retail outlets - leaving much room to grow.

A look at Nestle's growth numbers, though, paints a rather different picture. Revenue growth in the last one year is in the high single digits. Even if we assume the company will be able to grow earnings by 9 per cent (which is last one-year's earnings growth - the highest in the last five years), it is far lower than what the market seems to be pricing at 70 times earnings. Drink as much Nescafe as you want or fill your plate with maggi if it makes you happy but try to avoid picking up the stock at these valuations. 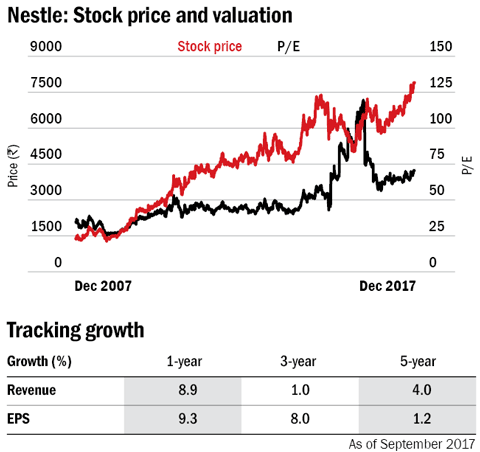