Its cash generation ability is the result of its size, cost advantage, monopoly position and market leadership After explaining the filters and mentioning which companies were successful in passing through them in the first part, we continue with the series by bringing before you one cash flow leader each day. Today, we bring before you integrated mining and resources producer--Hindustan Zinc.

Set up in 1966 as a public sector undertaking and currently promoted by Vedanta, Hindustan Zinc is world's second largest zinc producer with very low cost of production. Considering that its cost of production is one fourth of its price, gives it a huge cost advantage. With a market share of more than 80 per cent, the company enjoys a near-monopoly position in India. Hindustan Zinc owns the Rampura Agucha mine in Bhilwara district of Rajasthan. It is the second largest zinc mine in the world thereby providing the company with significant reserves and earnings visibility. 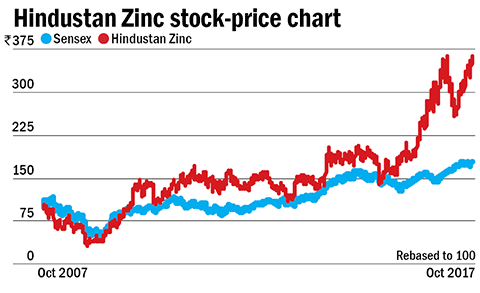 The demand for the bluish-silver lustrous metal is likely to remain strong as India continues in its growth trajectory. Its primary use is for coating steel to protect it from rust. Hindustan Zinc owns the full value chain--right from extracting and smelting zinc to extracting other metals like silver and generating power from its windmill power plants to meeting its power needs. This helps the company to keep its costs in check. The company's cash generation ability is the result of its size, cost advantage, monopoly position, market leadership and the fact that it will sustain its profits even if the price of zinc plummet by 70 per cent. Even after paying dividends of about Rs 27,000 crore in FY17, Hindustan Zinc still holds net cash of Rs 32,163 crore.