Cash flow leaders | Value Research https://www.valueresearchonline.com/stories/34832/cash-flow-leaders/ One of the reliable parameters for judging the health of a business is cash flows. Here, we try to explore the cash flow leaders in the Indian business terrain by applying several stringent criteria

One of the reliable parameters for judging the health of a business is cash flows. Here, we try to explore the cash flow leaders in the Indian business terrain by applying several stringent criteria

Cash is the king. The ultimate motive of every business is to generate cash at a steady pace from its operations and use it to expand its scale. It turns out, however, that very few are actually able to do so. In this story we discuss with you in details about the filters, why some companies got eliminated at various stages and finally which companies ticked all the boxes. We have included here all the companies that are above the threshold criteria consistently for five years thereby eliminating one timers and exceptional cases. We observed that the companies which cleared all the filters have some sort of moat due to their premium position or niche products, which gave them an edge over their competitors. This is the first of an eight-part series.

It measures the percentage of cash a company generates from its operations based on the total capital employed in the business.

We used CRC instead of return on capital employed (ROCE) since ROCE is calculated using profit before interest and taxes, which is an accrual measure of profitability and can be easily manipulated. The second filter
Debt is a burden on the company's balance sheet. Interest payments eat up shareholders' profits. The higher the debt, the higher are the chances that the company will struggle in tough times. In our second screen, we filtered out the companies with debt to equity of more than one. We were then left with companies which can finance their own operations and survive on internal cash flows. Some reputed companies like Motherson Sumi, Blue Dart etc., were not able to clear this filter.

The third filter
In our third screen, we used CFO divided by sales. We preferred it to the operating margin as the operating margin also includes the revenues not yet received in cash, which can be misleading at times. But CFO is difficult to manipulate. It tells us about the true cash-generating ability of a company from its operations. It measures the ability of a company to convert its sales into cash. This filter eliminated companies with high credit sales. (See table 2) 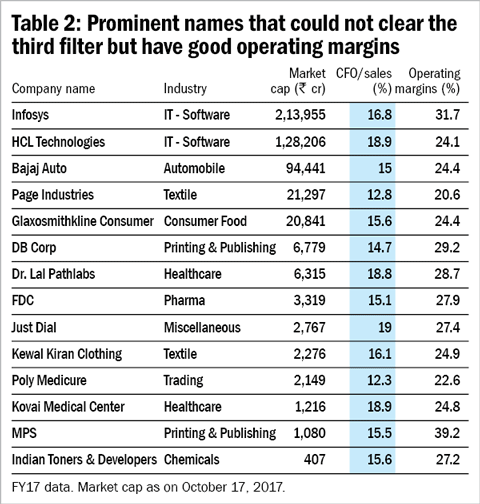 The fourth filter
In our fourth screen, we used free cash flow to firm (FCFF) divided by interest expense. We preferred it to the interest coverage ratio since FCFF is the real cash that a company has after accounting for capital expenditures. If a company can pay out its interest and still save some cash, that tells us about the strength of cash flows. La Opala was the only company in the list which could not pass this screen.

The fifth filter
Finally, free-cash-flow yield was used as a valuation metric. We preferred it to earnings yield, which measures the price an investor is paying for a stock in contrast to the actual cash generated by the company. We thus arrived at the final list (see Table 4).

Looking through the rear-view mirror
We also back-tested the above mentioned criteria during 2003 to 2008, which is one of the most tumultuous periods the market has witnessed. Three companies cleared our criteria during these tough five years and interestingly all of them are public sector companies (see Table 5).

We also discovered that these three companies were either monopolies or had pricing power advantage, with a significant cash generation ability. This not only helped them survive through tough times but also deliver significantly good returns. For example, Indraprastha Gas is the sole distributor of compressed natural gas in Delhi/NCR. Similarly, Container Corporation is the largest player in rail logistics, with 85 per cent market share. Being a subsidiary of Indian Railways, it has a monopoly position. ONGC also has a premium position as it is India's largest oil and gas producer.