Godrej Agrovet IPO - Essential points to consider | Value Research https://www.valueresearchonline.com/stories/34450/godrej-agrovet-ipo-essential-points-to-consider/ A powerhouse in agricultural products but with steep valuations. Go through our answers before you make up your mind A powerhouse in agricultural products but with steep valuations. Go through our answers before you make up your mind

By Neil Borate and Prasoon Vijay

India's farm animals need food and Godrej Agrovet provides it. It is India's leading compound animal feed provider based on installed capacity. It also makes money from dairy, crop protection, palm oil and poultry. The company operates out of 35 facilities to produce animal feed and has 4000 distributors. It was founded in 1991 and is primarily owned by Godrej Industries. The company has made several strategic acquisitions and joint ventures over time. In the process, it has diversified away from animal feed, reducing its share in revenues from 77% 2015 to 53% at present. Much of its future growth is likely to come from non-feed businesses such as palm oil and crop protection.

The Pros
Revenue grew at a robust CAGR of 17% from 2013 while net income grew even faster at 28% CAGR. The secret sauce behind this growth has been Agrovet's acquisitions. The company bought Astec Lifesciences at a discount to its market price and managed it well. It's palm oil business has also done spectacularly. The company's segments have synergies - it deals with farmers as both suppliers and customers. It's vast distribution network is also a major advantage. Let us also not forget its parentage, the Godrej name evokes respect and trust.

The Cons
Agrovet's PE of 42 is anything but cheap. It operates in fairly competitive markets and faces large, deep pocketed rivals (Cargill in animal feeds, Venky's in poultry and Amul in dairy). Some of its business (such as palm oil) are heavily regulated and carry a significant regulatory risk. The company's ESOPs policy is remarkably generous. Its Managing Director was paid a remuneration of about 95 crores in FY 17, mostly through an exercise of ESOPs (its profit for the same period was about 273 crores). It does not have any formal licensing arrangements in place for use of the Godrej brand.

The acquisitions story
Godrej Agrovet acquired a stake in Creamline Dairy in 2005 to bolster its dairy business. It raised this stake to 52% in 2015. To get a leg up in the poultry business (heard of Real Good Chicken?), the company entered into a joint venture with Tyson Foods a major US company in 2008. In 2015, the company acquired Astec LifeSciences to enhance its crop protection and agrochemicals business. 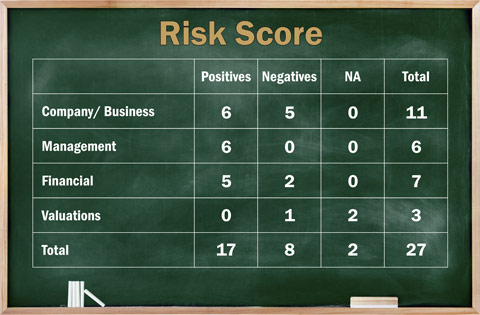