The ascent of the rupee | Value Research https://www.valueresearchonline.com/stories/33831/the-ascent-of-the-rupee/ A strengthening rupee against the dollar is likely to have negative implications for the economy

The ascent of the rupee 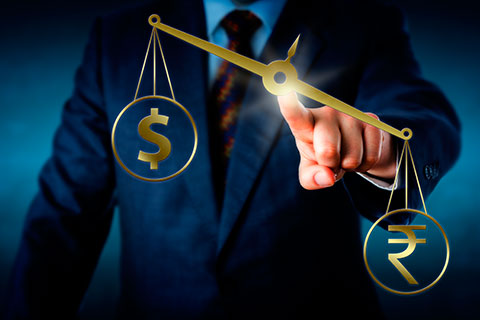 I am amazed that few people are talking about it, and I certainly don't see enough noise being made about it. If the dollar-rupee parity were 12 per cent undervalued, I am sure that it would be on the cover page of Femina.

Let's start at the beginning. Raghuram Rajan used to say often that cycles of rupee overvaluation have always led to a subsequent currency crisis. This was seen thrice in recent memory, in 2008, followed by 2011, then 2013. Each time, the rupee went into a cycle of overvaluation about 12-15 months prior to the crisis.

Rajan used to insist that these carry trading flows (my words, not his) caused mayhem when they reversed and that banks should be hedging most of their clients' dollar payables, against which India Inc was hedged only about 15 per cent of its total payables.

In 2014, he said clearly that he was comfortable with the rupee trading at 60-62.5 against a real effective exchange rate (REER) of Rs 60 in 2014, the time of the first 'Modi Mania', in May 2014. If we add structural inflation differentials to that, moderated by estimated productivity growth (of around 1.5 per cent), we find that the rupee is way overvalued.

Based on a simple interpretation of the trajectory of differential inflation vis-a-vis the dollar, most analysts were projecting Rs 69-70 as the target value of the dollar-rupee exchange. Not a single analyst saw the coming mayhem, when the rupee would appreciate almost 9 per cent from those levels, this at a time when the Chinese yuan is at 6.9, up 9 per cent from its pre-crisis level of 6.3.

So who is correct, the market or the analyst? Let's examine how this happened, and what it indicates.

There's a crack in the charts, a 'gap' that is usually taken in all charts as an irrational, emotional surge in the market, which should get reversed. In most deep markets, it usually does get reversed.

There's a sharp increase in volatility, as knock-on effects have triggered panic among exporters. Clear indication of some RBI intervention is seen, with evidence of reserve accumulation. But the reserves have not been to the same extent of the capital flows because of concerns over injecting too much liquidity in the domestic money markets.

Shockingly, the RBI did not do much to soak up the excess liquidity in its 6th April credit-policy meeting.

None of the above indicates an orderly discovery of the correct value of the rupee. We have other indicators of frothiness in other markets, particularly equities, where about half the money went.

Anecdotally, D-Mart is trading at a market cap of Rs 300 crore per store. Looking at the size of the store, there is no way it justifies a valuation so steep. RBL Bank has a P/E of 75. On a particular day, 313 stocks hit the upward filter on the BSE, and P/Es are at levels exceeded only four-five times in history.

Normally, the rupee underperforms the forward curve in the dollar by a small margin on the belief that India's productivity growth will allow its exporters to survive at the lower dollar-rupee prices. But a 10 per cent drop from those prices is inconceivable. There is no historical precedent for such a steep overvaluation of the rupee.

Could it be that this is a repeat of the same phase of equity bullishness that we saw in 2007-08, accompanied with those grandiose notions of our economy's greatness (remember the 'decoupling' argument). In November 2007, in the middle of the equity peak, there were those projections of then-prominent industrialists that the rupee would reach Rs 35 to the dollar and we know what happened thereafter.

Quite obviously, fundamentally, the rupee is grossly overvalued. Technically, the crack in the charts is suggesting a wave of irrationality which must reverse in the not-too-distant future.

I don't think that equity markets are yet in a bubble, although anecdotal evidence of overvaluation in some markets is available. So markets will underperform over the short and medium term, and the best they will do is to time-correct, maybe not price-correct.

So the biggest value just now is to buy the dollar against the rupee. Even after paying the forward premia, there is significant upside left if the rupee corrects back to the fair value. If the reversion is quick, the carry cost will be just about a rupee, while the upside is about Rs 4.

This time, if there's a crisis, it will come from global cues, particularly an American recession. Strong domestic flows will put a bottom to the Indian equity markets, and this caps the downside to about 10 per cent. The rupee also won't go into crisis, but it will certainly be bearish.

Brazil had talked of a Tobin tax on the kind of irrational flows that went into the real (the Brazilian currency) and created a 36 per cent appreciation in the currency. Can you imagine what would happen to India if similar irrational flows came into Indian rupee just now?

What are these flows betting on? That the current BJP government is going to stay around for a long time and that would give India a reformist government for a substantial period of time and that this would raise productivity growth to justify such steep currency overvaluation. While the underlying premise is probably true, it is simply not possible that such productivity gains can be justified.

And that's the nub. Stocks can be undervalued for long periods of time, and you depend on market forces to correct them. But a currency cannot be overvalued like this because the economy can develop serious distortions if capital flows are allowed to distort currency valuations.

In the last 32 years, the rupee has dipped below its 200 DMA (daily moving average) only when it is returning from a previous currency crisis and, of course, the Greenspan years. This is the first time, when it is being driven by overexcitement about the Indian economy. These flows have to be sterilised in the same manner that Raghuram Rajan very deftly did in 2014, when he accumulated reserves very aggressively to communicate to the markets that the RBI would follow a visible forward curve, allowing both importers and exporters to plan their hedging levels year to year.

Why has the RBI allowed the rupee to pierce those levels? Does it really believe that expectations of such productivity gains are justified and that the rupee deserves such a valuation premium. How can that be, when inflation targets were hiked in the same meeting that RBI stayed mute on liquidity hardening measures.

This is no longer a valuation issue, but an issue on macro management, which has the potential to seriously distort the competitiveness of Indian exporters, especially in an environment when our most important trading partner is actually seeing a softer currency. Going by the technical indicators above, this is the first time that the RBI has communicated to the currency markets that it is comfortable with serious rupee overvaluation, eroding its own credibility in managing the 'dirty float' of the rupee. The credibility will not be easy to retrieve, and India will be targeted for more such 'currency attacks', which will increase volatility in the rupee, exactly what the RBI is trying to prevent.