No more toiling | Value Research https://www.valueresearchonline.com/stories/32964/no-more-toiling/ Here is what is driving the recovery in the stocks of upstream oil companies, ONGC and Oil India

Here is what is driving the recovery in the stocks of upstream oil companies, ONGC and Oil India Upstream oil companies ONGC and Oil India are up 35 per cent and 17 per cent, respectively, in the last six months. Though oil prices have started to rise lately, they have stayed low for much of the year. The graphic highlights how crude has moved over the last six months. Even though it has witnessed a lot of volatility, crude at the end of the year is a little over its price six months ago. Why then are ONGC and Oil India moving up?

Analysts at Jefferies Equity Research believe the primary reason behind the good show is a sharp decline in expenses. This has led to a positive surprise in earnings. The second reason they have given is that the government has allowed oil-marketing companies to hike retail prices of LPG and kerosene. This is expected to further lower under-recoveries - some of which could accrue to the public oil-exploration companies.

The table breaks up how the two companies, ONGC and Oil India, have benefitted from lower expenses.

ONGC has seen its crude cess fall by 22 per cent (YoY) in the first half of the current financial after the effective rate came down to 16.5 per cent against the earlier announced 20 per cent cess on domestically produced oil. Then there was a decline in other operational expenses, which fell by 16 per cent. A change in accounting policy saw ONGC's depreciation, depletion and amortisation (DD&A) expenses go down 22 per cent (YoY). This particular item is not likely to be repeated in the future though.

Oil India, too, saw its crude-cess expenses fall by 28 per cent on a lower cess rate of 16.5 per cent. The company also gained from lower employee costs and a decline in other expenditure.

Then there is the role of lower kerosene subsidies. The government has allowed oil-marketing companies to hike kerosene prices by around 35 paise every fortnight and LPG prices by Rs 2 per cylinder per month. Though the mandate is for ten such hikes, if the government further extends the monthly kerosene price hikes, analysts at Jefferies think that in a matter of only two-three years, the government's share of under-recoveries can be eliminated. With no losses to share, upstream companies would stand to gain. Similarly, in the case of LPG companies, if the government continues its policy of monthly price hikes but raises those hikes to Rs 6-7 per cylinder per month, under-recoveries could be eliminated in two-three years. Upstream companies would again stand to gain in such a situation.

Upstream oil companies therefore seem to be enjoying the dual advantages of lower expenses and the market's expectations that under-recoveries are likely to fall in the future. 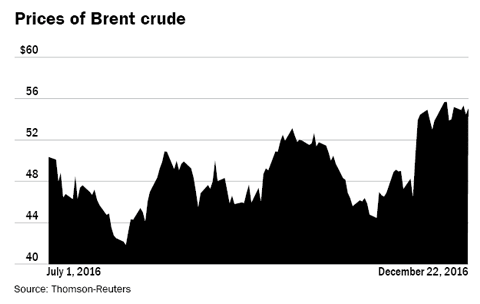 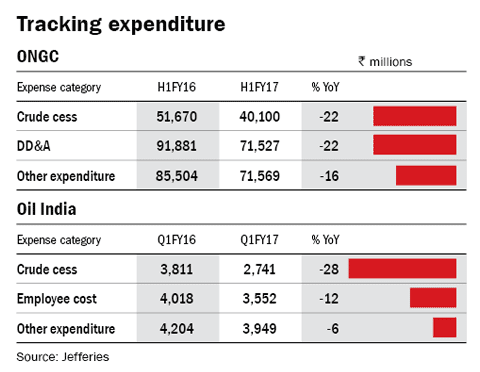 This story appeared in the January 2017 issue of Wealth Insight.