Who wins in India: Value or Growth? 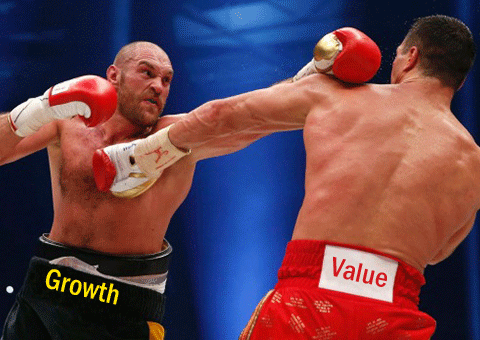 Living investment legend Warren Buffett has for long extolled value investing. But in the Indian context, what clicks: Value or Growth? Data from MSCI indices tracking the two different styles of investing throws up interesting results. Analysing the returns of both styles for the last 10 calendar years i.e 2006 to 2015, shows that 'growth' has been on a six-year winning spree. On the other hand, 'value' which had huge success in 2006, 2007, 2008 and 2009 has failed in recent years.

'Value' won but long ago
The 'Value' index delivered the goods in the initial part of last decade. While the 'Growth' benchmark gained 45.15 per cent in 2006, 'Value' index pulled higher with a 47 per cent gain. Value was a big gainer in the bull market of 2007 when the index returned 66.78 per cent compared to the modest 38.57 per cent racked up by the MSCI India Growth index. In 2008, when markets fell like nine-pins courtesy the US financial crisis, Value (-51.26 per cent) again out-performed Growth (-62.48 per cent) with fewer losses. 2009 was a year of revival as markets bounced back with fury. That year as well, 'Value' won hands down with 93.3 per cent calendar year return in comparison with 89.72 per cent by 'Growth'.

So after a six year spell of lagging the growth style, is, the tide turning in favour of 'value' again? One view is that it is, if you measure returns from August 2015. "Value has outperformed growth in India since August 2015, when China's currency started to depreciate, causing a major stir in global markets. Over the last decade there have been three instances when value has outperformed - the 2006-08 bull market, the summer of 2013 to late 2013 following the taper tantrum, and the Modi rally since August 2015," says Devendra Joshi, Asian Equity Strategist. HSBC Global Research.

Specific factors were behind this out-performance: India moved in sync with global bull markets (2006-08 or earlier this year), and domestic issues, such as actions by the central bank and the Modi euphoria helped cyclical stocks.

"However, as we move into the summer we think global risk aversion will steer the market away from value and back towards growth. The argument against this is that growth sectors tend to be expensive in India," Joshi added.