Overpriced | Value Research https://www.valueresearchonline.com/stories/31497/overpriced/ The Nifty 50 is trading at high valuations and has no clear trend of earnings growth. Investors should avoid entering the market

The Nifty 50 is trading at high valuations and has no clear trend of earnings growth. Investors should avoid entering the market 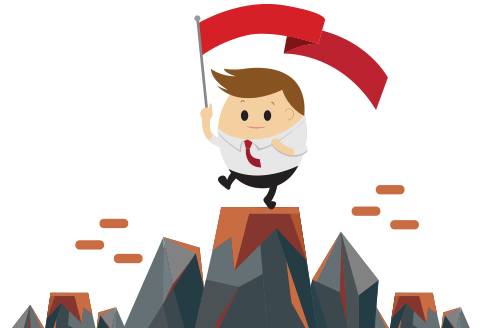 A while ago, the RBI governor controversially quoted the old proverb about the one-eyed man being king in the country of the blind. This was in the context of India being the fastest-growing large economy in the world. Presumably, Rajan's point was that India was not growing particularly fast, except in comparison with other nations.

The macroeconomic data, or at least the GDP growth estimates, are strong. But there are many contradictory variables that suggest that the new method of calculating GDP is overstating growth. It is also true that the corporate economy has not done well for a while.

In fact, it could be argued that the corporate economy is not growing at all. But at best, it may have started shrinking. The latest Q4 results in aggregate show a continuing pattern of lower profits. But that is because of huge write-offs in the banking sector. Other corporate sectors have seen some growth after a long period of stagnation.

One of the most stunning graphs is that of the Nifty 50's EPS record mapped since 2010 (Figure 1). 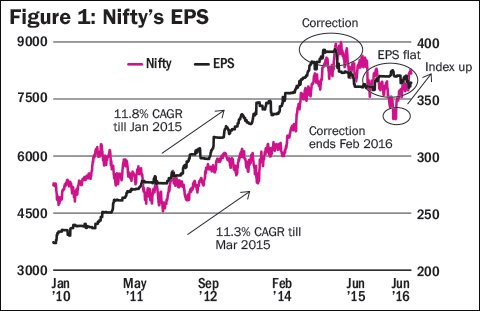 Between January 2010 and January 2015, the Nifty 50's EPS, as released by the NSE (last four quarters, weighted by free float in the same ratio as the index) climbed from ₹224 to ₹393. That was a CAGR of 11.8 per cent. Although inflation was high through this period, there would have been real returns.

After that, the trend of EPS growth broke down. It appears that the trend of earnings losses has more or less bottomed out. But it has not started climbing yet. If we remove the poor results of public-sector banks, there is probably an upwards trend. In June 2016, the EPS was ₹364. The CAGR over January 2010 to June 2016 was down to 7.7 per cent. This might not have beaten inflation by much, if at all.

The market response has been interesting as the superimposed chart shows. The index went up from 5,232 in January 2010 to an all-time high of 9,120 in March 2015. Unlike the almost linear growth in EPS during this period, the index had several corrections and there were leads and lags versus the EPS growth. But the CAGR (neglecting dividends) was 11.3 per cent between January 2010 and March 2015, which pretty closely matches the EPS growth through that five-year period.

The index has since rebounded. The rebound is presumably in anticipation of the earnings pattern coming back to the old normal. Is it justified? Only time will tell. As of now, the EPS is flat while the index is going up.

Valuations through this entire period (2010-2016) have followed a typically random but predictable pattern (Table 1). The price-to-earnings (P/E) ratio has been normally distributed. 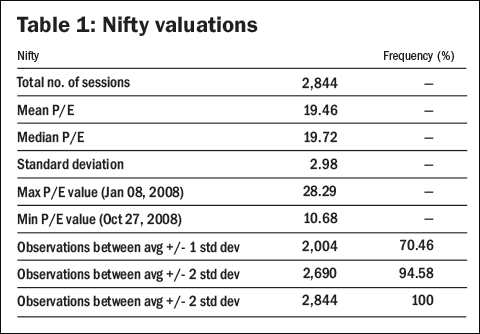 The Nifty's frequency distribution table (see Figure 2) also makes it apparent that the P/E is more or less normally distributed. 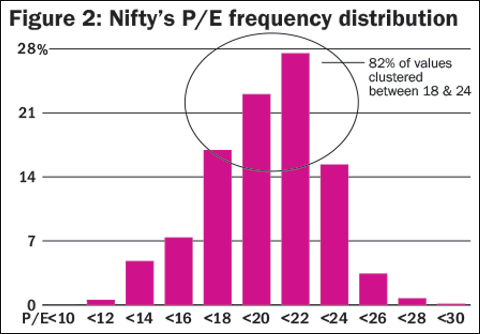 Over 82 per cent of the time, the P/E lies in the range between 18 and 24. An investor would see that he was getting a bargain if the P/E was below 18 and that he was in the overvalued territory if the P/E was above 24. In fact, we can use the data to refine this easy observation.

Assume a long-term investor is looking to hold for at least three years. What is the relationship between valuation and return? Take a look at the rolling returns for an investment, assuming it is held for three years (Table 2). (The rolling return calculates the return for a three-year time frame for every session. There have been 2,068 such three-year rolling sessions between January 1, 2005, and June 10, 2016). 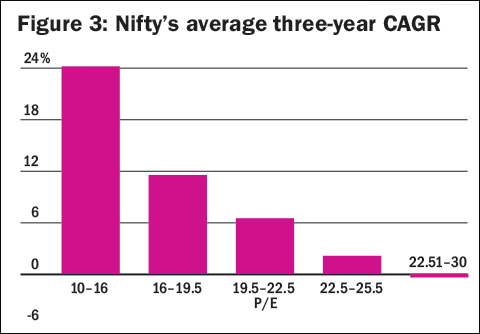 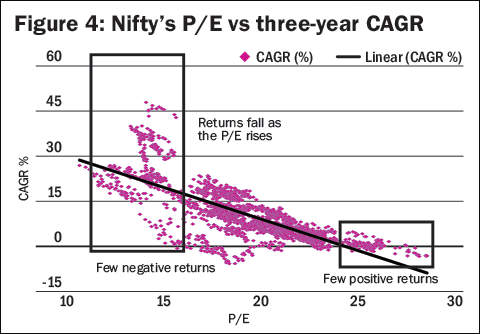 This relationship should make a long-term investor very cautious when the valuations are high.

What about the valuation-return relationship for a medium-term investor who is looking to hold for just about one year?

Take a look at the data for rolling returns for an investment held for one year (Table 3).

A similar pattern of higher returns for lower valuations is obvious (Figure 5). 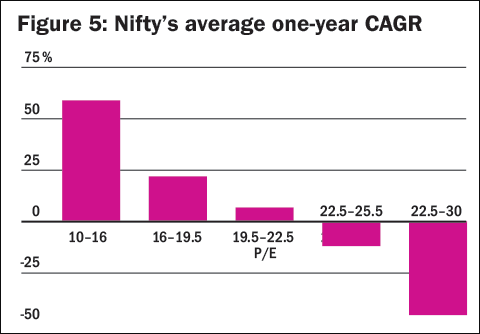 In fact the returns are negative at a P/E above 22.5 for a one-year rolling strategy. 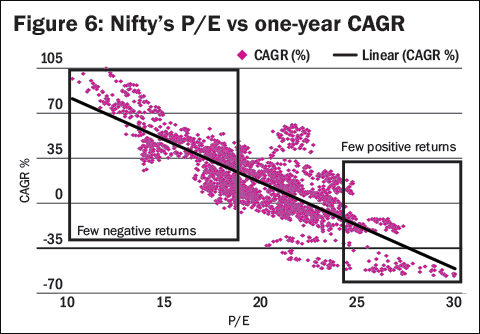 Right now, the Nifty is trading at a P/E of 22.5. That is historically a level of low returns or negative returns. There is also no clear trend of strong EPS growth. The long-term investor should probably be wary about increasing commitments at this point.

What are the alternative channels for savings? Among other common asset classes, real interest rates are still positive, commodity trends (including precious metals) are slightly negative and the Indian real-estate industry is still going through a crisis. A case can be made for higher allocations to debt as a class. The danger is that inflation has climbed in the past two months (April, May 2016).

Passive investors don't have to take the same difficult decisions as active investors. But even for passive investors, who maintain systematic equity exposure, the current high valuations should serve as a red light. This is not a good point for increasing equity allocations.