To (or not to) bank on | Value Research https://www.valueresearchonline.com/stories/30251/to-or-not-to-bank-on Most companies in which banks have converted debt to equity could be in trouble and this could impact the banks themselves Looking into the major equity holdings of banks gives us an interesting insight. We find that there are quite a few companies in which banks have converted equity to debt. The table below gives the list of holdings where equity held by banks has risen the most in the last three years. 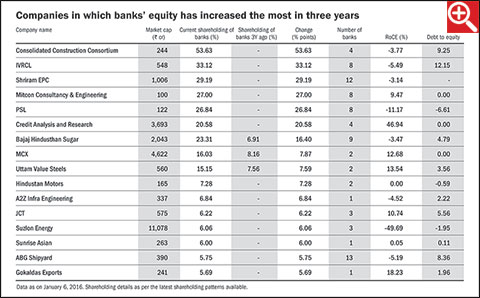 Going through the list, we can see that in most cases stressed debt has been converted into equity, with a few exceptions like Credit Analysis and Research. Ten out of the 16 holdings have a negative return on capital employed and nine of them have a debt-to-equity ratio of either more than two or below zero, which is also alarming. The biggest rise in equity has been witnessed by Consolidated Construction Consortium. Bank of Baroda, ICICI Bank, IDBI Bank and State Bank of India converted their debt into 53.63 per cent equity stake in December 2015 quarter, as part of the restructuring package offered to the company.

In the coming years, it would be interesting to see how much these exposures are going to yield for banks and how fruitful these conversions are going to be. History doesn't give a rosy picture for such conversions, however. For example, banks collectively converted debt into 18.78 per cent equity of Kingfisher Airlines (KFA) in March 2011. Due to the dismal performance of the airline, they had to sell their stakes at losses. They held only 5.89 per cent of equity in September 2014. KFA does not trade any more. Its lenders are still struggling to recover their dues.