Caught in the crossfire | Value Research https://www.valueresearchonline.com/stories/29768/caught-in-the-crossfire How the government's bid to tackle the mounting losses of power-distribution companies may hit power-finance companies

Caught in the crossfire The government set about to address an ailing power-distribution sector. The much-needed reforms have taken the shape of the UDAY scheme. Here's how the sector will get affected and how the scheme may hit power-finance companies.

What is UDAY? At its core, the UDAY (Ujwal DISCOM Assurance Yojana) scheme calls upon state governments to take over all of the debt of power-distribution companies - 75 per cent over the next two-three years and the remaining 25 per cent backed by state guarantees. States will also be required to bear any future losses of distribution companies.

Why has the government taken this route? Power-distribution companies have racked up losses to the tune of an estimated ₹60,000 crore. What makes matters worse is that distribution companies in a number of states cannot hike rates to cover the tariff losses of previous years. As a result, over the years, losses have piled on. Yet, if fully implemented, this scheme is expected to result in reduction of losses by ₹44,000 crore.

Bad news for some The UDAY scheme may appear just what the doctor ordered for power-distribution companies. It, however, spells trouble for another set of power sector companies - the financiers, specifically Power Finance Corporation (PFC) and Rural Electrification Corporation (REC). These two state enterprises lorded over loss-making distribution companies, generating higher yields for loans made out to these loss-making companies.

If the UDAY scheme is implemented, distribution companies will see an improvement in operating performance that may reduce the demand for loans for covering losses. The requirement for loans, as a result, could also see a decline.

In a double-whammy blow to power-finance companies, better operational performance of distribution companies would lead to their ratings improvement, which in turn could then allow them access to banks, away from the traditional go-to guys, PFC and REC.

Loan growth for power-finance companies, therefore, is likely to take a hit. The annual loan growth for PFC and REC could fall from the 22 per cent recorded between FY10 and FY15, says JM Financial Securities, to around 8 per cent and 7 per cent CAGR, respectively, between FY15 and18 (see the image below). 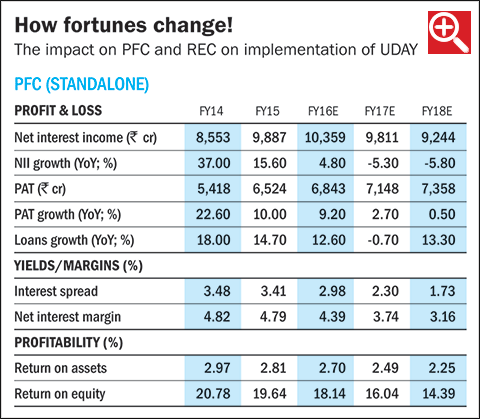