Different perspectives | Value Research https://www.valueresearchonline.com/stories/29086/different-perspectives/ FIIs and DIIs have often had opposite standpoints on the market and stocks, making them invest in or withdraw from them at different times

FIIs and DIIs have often had opposite standpoints on the market and stocks, making them invest in or withdraw from them at different times

It appears like domestic institutional investors (DIIs) and foreign institutional investors (FIIs) have different styles of investing in India. While DIIs tend to hold stocks for the long term, FIIs have a medium- to short-term horizon. They have even acted in opposite manners on certain occasions. For example, from January 2012 to April 2014 while DIIs (mutual funds, to be precise) were withdrawing their investments in the Indian market, FIIs kept on pouring money. From May 2014 to April 2015, both mutual funds and FIIs accumulated stocks. Now, since May 2015 FIIs have been selling, but mutual funds have been buying aggressively. Recently on Black Monday, August 24, mutual funds were net buyers, while FIIs deserted the Indian market. The amount that mutual funds bought for exceeded the amount that FIIs sold for.

We have tabulated top ten stocks where DIIs (mutual funds and insurance companies) have big stakes as per cent of equity but FIIs have very less stakes and vice versa. We have termed these holdings as 'contra' holdings. One thing which is noticeable is DIIs have invested mostly in the stocks with a relatively low price-to-earnings multiples, whereas FIIs have high P/E stocks. The average P/E of DII contra holdings comes to 18 while that of FII contra holdings comes to 32. 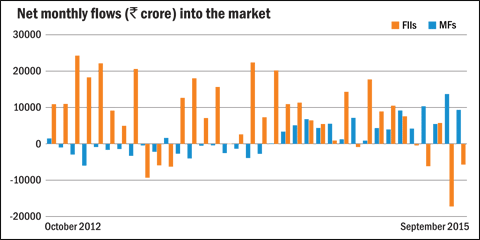