Crucial tie-ups with and licences from international players like Lubrizol, and acquisitions have helped propel Astral Poly Technik's growth

Two main types of plastic pipes are sold in the country. The first is PVC pipes - the kind that Finolex and Supreme Industries have made a name for themselves in. Then there is another kind of pipe - the CPVC or chlorinated PVC pipe, which undergoes a process that makes PVC pipes more heat resistant than traditional PVC pipes. The most common place where CPVC pipes are used is in hot- and cold-water applications. Astral has made a name for itself in the CPVC pipe segment.

Astral Poly Technik was formed in 1996. The company introduced CPVC pipes in 1999, bringing CPVC products for the first time into the country. It took another turn in 2004 when it started producing lead-free PVC pipes. Down the years, Astral has acquired a couple of companies and licences that today promise to push the company forward, both in terms of technology and network reach. Growth drivers
Tie-ups with global technology majors: CPVC is a licensed product of the US-based Lubrizol Corporation. There are only two companies that are Lubrizol's licensees of CPVC in India - Astral and Ashirvad Pipes. On top of that, Astral is the only company in the world to receive licences for four CPVC products from Lubrizol. This gives Astral a huge push ahead of the competition.

Astral also has tie-ups with Speciality Process Systems and Harvel, both US-based companies, to utilise their technology in the manufacture of PVC and CPVC pipes. It has other tie-ups like those with IPS Corporation to manufacture solvent cement for pipes and fittings and with UK-based Seal It Services to produce adhesives and sealants.

Specialist in CPVC: Astral is now a specialist in CPVC. It has received a licence from Lubrizol for four of the latter's products: Flowguard, Blazemaster, Bendable and Corzan. These licences give Astral a technological edge.

Raw material main barrier to entry: The demand for CPVC resins is more than the supply. Lubrizol is one of the biggest manufacturers of the resin worldwide. Astral gets the resins directly from Lubrizol, whereas other CPVC pipe manufacturers have to source their material from secondary sources, which often leads to cost and quality issues.

Diversified portfolio: CPVC pipes are not the only product that Astral sells. It also sells PVC pipes and has entered into the adhesives and sealants business. Astral's revenues have started showing effects of diversification. In FY09, close to 70 per cent revenues came from CPVC and 30 per cent from PVC. Over the years, the share of PVC has increased to 41 per cent of Astral's revenues (FY14), while the share of CPVC is down at 58.4 per cent.

Adhesive power: The Indian adhesive market is dominated by Pidilite. That has not deterred competition. That's because at 0.2 kg, India has one of the lowest per capita consumption of adhesives in the world. Also, the adhesive industry in the country is largely fragmented, with a mix of foreign, domestic and unorganised players.

Astral entered the adhesives and sealants business in FY12 under licence with the US-based IPS Corporation. It also acquired 80 per cent stake in the UK-based Seal It Services, which manufactures sealants like tile and industrial adhesives, waterproofing and cement dyes, among others. Astral acquired 76 per cent stake in the India-based Resinova Chemie last year, which manufactures epoxy adhesives and sealants.

Astral's expanding reach: One distinct advantage that Astral is deriving from its acquisitions, especially within the country, is the effect of expanding network reach. Resinova Chem, the epoxy adhesive company, for instance, is available at four lakh outlets. This adds well to Astral's own network of over 18,000 dealers.

Concerns
Economy-linked: Astral's fortunes are inextricably linked the state of the economy, of construction of housing, commercial and industrial activities. A slowdown or delayed improvement in the economy will bear upon the performance of the company as the user industries take a back seat. Take housing for instance. If housing demand slows down, developers could slow down projects, which could impact Astral's growth prospects.

Crude-linked raw material: Resins account for 62 per cent of sales and are derived from crude. That exposes them to the price fluctuation of crude. The raw material in turn accounts for 72 per cent of net sales. Also, Astral has managed to hold onto its margins, even though crude prices went up and down in the last couple of years. The dollar-rupee exchange rate is another lookout item.

Licence risks: Astral's success has hinged upon its licences with Lubrizol. Though there are no licence cancellation risks present, what Lubrizol can do at some time in the future is open up its products or enter into licence agreements with some other competitors. 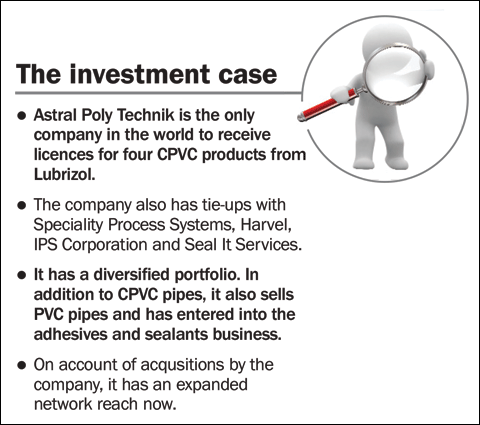 Financials
Astral has been in momentum over the last couple of years. Revenue compounded at 41 per cent CAGR in the last five years. Even the EPS compounded at 41 per cent during this period. Operating margins have averaged at close to 15 per cent, while ROCE stood at 30 per cent. Astral is likely to report annual revenue growth of 30 per cent and PAT growth of 40 per cent through FY15-18, according to Kotak Securities. The main driver of this growth is expected to be plastic pipes, recent launches and the benefits accruing from the adhesives and sealants business. Volume growth is likely to be at 17 per cent CAGR in the next three years.

Valuation and outlook
Astral's P/E of around 65 may appear high, but keep in mind that earnings have compounded at 41 per cent in the last five years. The economy today looks the best it has in any of the last five years. Considering the high earnings growth, even in a period of slowdown, the stock trades at 1.6 times its five-year PEG ratio. This is still a buy in spite of the stock doubling in the last 12 months. The opportunities ahead and Astral's right moves so far are likely to make it a long-term winner.