Are PSUs Losing Steam? | Value Research https://www.valueresearchonline.com/stories/26659/are-psus-losing-steam Having beaten the benchmark Sensex prior to the 2014 national elections, the BSE PSU index has been an underperformer in the last six months

Having beaten the benchmark Sensex prior to the 2014 national elections, the BSE PSU index has been an underperformer in the last six months

The returns given by the BSE PSU index in the period November 2013-May 2014 were 43.64 per cent as against the Sensex's 21.16 per cent. However, during the period May 2014-December 2014, the returns given by the PSU index are -1.65 per cent as against the benchmark Sensex's 15.56 per cent. Notably, November 2013-May 2014 was the period of run-up to the national elections and the latter period is the post-election period, with the new government in the driving seat.

It looks clear that the market was indeed anticipating the coming of a stable government under NDA--and Narendra Modi. Narendra Modi, with his successful Gujarat model and long tenure as the Gujarat CM, was increasingly seen as a reformer for government companies. The market was expecting that with the coming of the new government, the economy would pick up and there would be greater chances of disinvestment in PSU companies. The previous term of the NDA government had also seen a slew of disinvestment activity.

The stock market during the times of the UPA government had lost its sheen; many PSU stocks were available at dirt-cheap valuations. These stocks also had high dividend yields and traded at a discount to their book values. Thus, during the November 2013-May 2014 period, investors lapped up PSU stocks. Even the PSU ETF introduced by the government and currently being managed by Goldman Sachs got an overwhelming response. By the time the Modi government became operational, many PSU stocks had been fairly valued, given their financials and future prospects.

During the May 2014-December 2014, the BSE PSU index has grossly underperformed the benchmark returns, with stocks like MMTC, IDBI Bank and NHPC down by around 33, 25, and 21 percentage points. However, there is some stock-specific action in the PSU pack and some stocks are still doing well. One important reason for the decline in PSU index could be that the Modi government seems to be more inclined towards revamping the operations of PSUs rather than selling its stake in them. Also, many PSUs, such as Coal India, Power Finance Corporation and NHPC, are headless. Investors are not sure as to how much time it will take for PSUs to start performing. The market doesn't seem to be expecting much from them, which will keep their prices in check. A bleak outlook will be a serious overhang for PSU stocks. 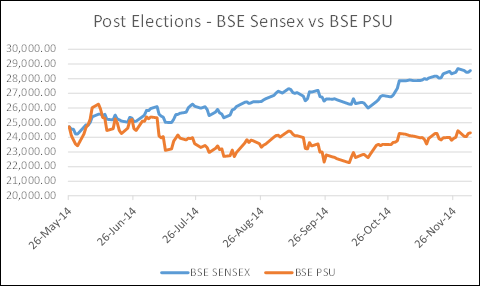 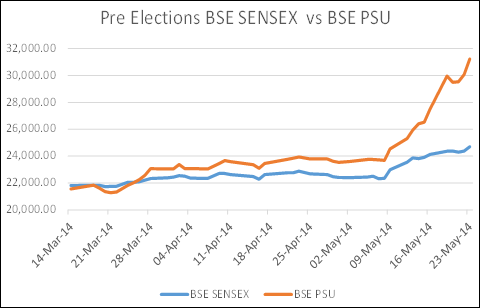