Rallis India has come a long way from buying jute bales from press owners in Kolkata, which was its first line of business. Today, it is one of India's leading agrochemical companies, with a comprehensive portfolio of crop protection chemicals, seed varieties and specialty plant nutrients. It has an extensive nationwide distribution system supported by an efficient marketing and sales team.

Agri inputs makes the company the country's second largest agrichemical company, which has the widest product portfolio in the country and boasts a brand recall higher than its competition. The company has marketing alliances with several multinational agro-chemical companies, including FMC, Nihon Nohyaku, DuPont, Syngenta and Makhteshim Agan. Thanks to the huge outsourcing opportunities overseas, the company has a significant overseas business. 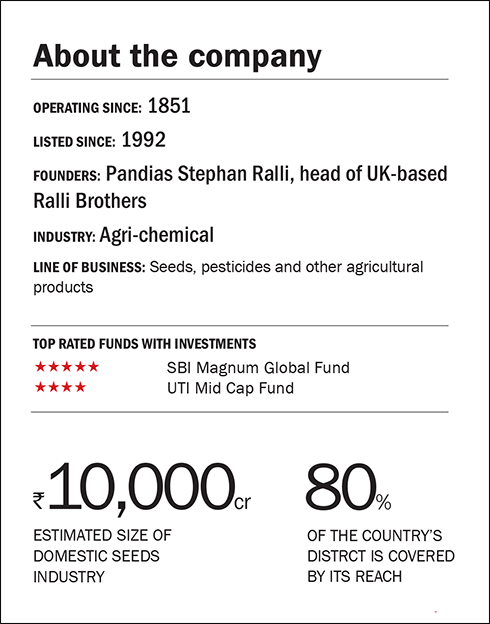 Strengths
Rallis has a strong distribution, a wide product portfolio and a strong pipeline of new launches. The company reaches out to over 40,000 retailers and is present in over 80 per cent of the country's districts. This gives Rallis a matchless network to sell its products.

Strong brands: Rallis has one of the strongest portfolios among agrichemical companies and 7 out of Top 10 pesticide brands are from the Rallis stable. The company also has a wide range of products such as seeds, organic manure, pesticides and agricultural implements, which gives it multiple points to reach out to farmers. In recent years, the company has been registering 5-6 products and launching between 3-4 products every year.

Farmer connect: Rallis has developed strong on-ground ties with farmers with initiatives like Kisan Kutumbha, a farmer outreach programme that helps the company look into the requirements of farmers. At the same time, this initiative provides a window where it can showcase its offerings that meet farmer needs. The Kisan Kutumbha has now given Rallis a database of more than 10 lakh farmers which details farmer's crops and agri-input preference. Such a detailed map of the country's farm requirements helps the company match farmer requirements to products.

Rallis also organises the Samrudh Krishi for grapes, cumin and chili farmers and the Grow More Pulses programme that covers close to 10 lakh acres that connects with 1.6 lakh farmers to promote marketing of pulses. Frequent focused group discussions with farmers are organised to understand farmer's needs and requirements. In the seven years up to FY12, the company has held discussions with over 4000 farmers in more than 20,000 villages.

Growth drivers
Seeds: India's seeds industry is the sixth largest in the world and growing at 12 per cent annually. Rallis acquired a majority stake in a seeds research and manufacturing company Metahelix Life Sciences (December 2010). The domestic seeds industry is estimated to be close to ₹10,000 crore, which is too vital for any serious player to ignore. The opportunity goes well with the company's stated objective of increasing the share of non-pesticide revenues from 15 per cent levels (FY13) to 40 per cent over the next few years. Rallis' distribution network and strong brand recall can enable the company to rather quickly take its seeds business on a pan-India scale. Metahelix is expected to report revenues of close to ₹220 crore in FY14 according to Kotak Institutional Equities which should give the seeds business a critical size.

Exports: A third of Rallis' revenues today are generated from exports and it provides Rallis with two advantages. First, it helps de-risk revenue and earnings from the vagaries of the unpredictable Indian monsoons. Second, it helps the company service the growing global demand for contract manufacturing of generic agrichemicals. Global agrichemicals companies like Bayer, BASF and Syngenta are increasingly outsourcing their low value generic active ingredients to low cost countries though mainly China.

In a conference call following the December 2013 quarter results the company management indicated that a number of Japanese companies were evaluating India as a potential outsourcing destination after months of bumpy relations with China; its primary outsourcing nation.

In the same diversification vein, companies in the US and Europe that had up till now outsourced 80-90 per cent of their requirements to China have started scouting for alternative outsourcing destinations following quality issues faced there in the last couple of years. In what can be viewed as a upbeat sign, the demand for contact manufacturing was higher than what the company could supply - Rallis is already running near full capacity at its Dahej plant.

Concerns
By nature of its business, Rallis' profitability depends on optimum weather conditions. The El Nino threat on one hand and unseasonable rains and hailstorms like those seen in March this year destroyed several lakh acres of crops in Madhya Pradesh, Maharashtra and Punjab besides impacting Rajasthan, Gujarat, Haryana, Uttarakhand and Andhra Pradesh. A low incidence of pest attack can also impact sales as seen during the December 2013 quarter.

Financials
In the last three financial years ending FY13, Rallis reported an annual revenue growth of 18 per cent while operating profits were up eight per cent. The relatively debt-free company had a debt to equity ratio of 0.21 and a ROCE of 26.45 per cent (again FY13). According to Kotak Securities, Rallis is likely to report a revenue growth of close to 15 per cent in the next two years while earnings are expected to grow at a faster clip of around 30 per cent.

Valuations
Rallis trades at 24 times its trailing twelve month earnings; a premium to the industry PE of around 19 times. However, the premium valuations are supported by its sector leadership and a higher than industry growth rate. Rallis is not a one year buy-and-sell investment candidate. If you are looking for the best in Indian agriculture, Rallis is a top contender.